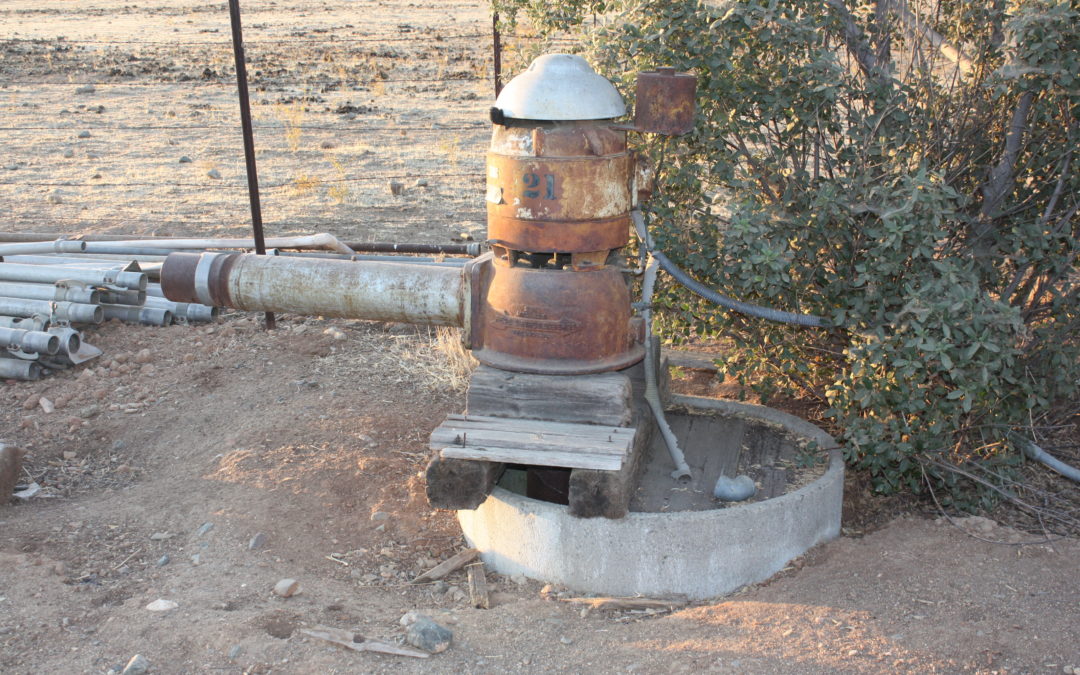 Mike and John stood back from the drilling rig, working on Mike’s ranch.  They’d been there about ten minutes, just watching the plastic casing being inserted into the test hole.  John turned to Mike, and asked how long the drilling had been going on, and when were they to be done?

“They started six days ago and should finish in about five.  Their building a group of monitoring wells, each one deeper than the other” Mike said.  John nodded, then asked why there were drilling these, and not a new irrigation well.

Mike pointed to a fellow in a different colored hardhat, and said “That fellow is an engineer, from the GSA.  This is what he explained to me.”  Mike began to explain to John, that most of the wells in the Valley are irrigation wells, and they are spread out all over.  The monitoring network needed to cover a large area, and it needed good data as well.  But the most data are in the cities, where the wells are bunched up, and the amount of data is much greater.

“So, irrigation wells are all over the place, but the data is not too complete, not enough measurements, not discrete enough so they said.  And City wells have plenty of data, but they are all in just a few places” Mike points to the wells being built “Those are true monitoring wells, you can measure the actual water levels at different depths”.  Mike continued “And they can space them out, located them in the right places, so that they have a better network, produce a more accurate map of the groundwater table.”

John turned his attention back to the drilling rig and the crew building the monitoring wells.  “Why don’t they want to just use our irrigation wells, seems like just more added costs, and most of us have several wells they could use.”

Mike explained that the GSA consultant he had talked to, a hydrogeologist, explained that irrigation wells are designed and built to obtain the most water possible.  Often, Mike explained, the irrigation wells would take water from multiple aquifers, and so the actual water levels in their wells was not “representative”.  Mike went on to say that irrigation wells, according to the hydrogeologist and the well driller, were usually not maintained, and as such often had holes in them, letting water in from all different depths.

John said he still didn’t understand why that was important, how that could affect them?  Mike nodded and said “I felt the same way, but what they explained was that if SGMA says groundwater levels can’t decline more, then they need to be able to demonstrate that they aren’t.  If we have our pumping restricted, then we should see water levels come up.”

Mike continued to explain “Most of our wells are deep, but not all irrigation wells are; however almost all of them are perforated through many aquifers.  We need to be able to show that when we cut back, the water levels are improving.  If we don’t have those monitoring wells, then it might be possible for slower recharging, deeper aquifers to appear like we aren’t making a difference.  And if that happens, we might be considered as violating SGMA”

John said he understood now but asked one more question.  “What are all those college kids doing over there, under the tents?”  Mike looked over to where the University vans were parked and smiled.  “Well, since we’re drilling these specialized wells, the University got funding to do some very scientific sampling, formations and discrete water samples and that sort of thing.  Helps us understand our groundwater even more and gives those kids a much better learning environment.  And, I didn’t want to miss an opportunity to help, so I said they could drill on my property.  Might work to my benefit, more than likely.”