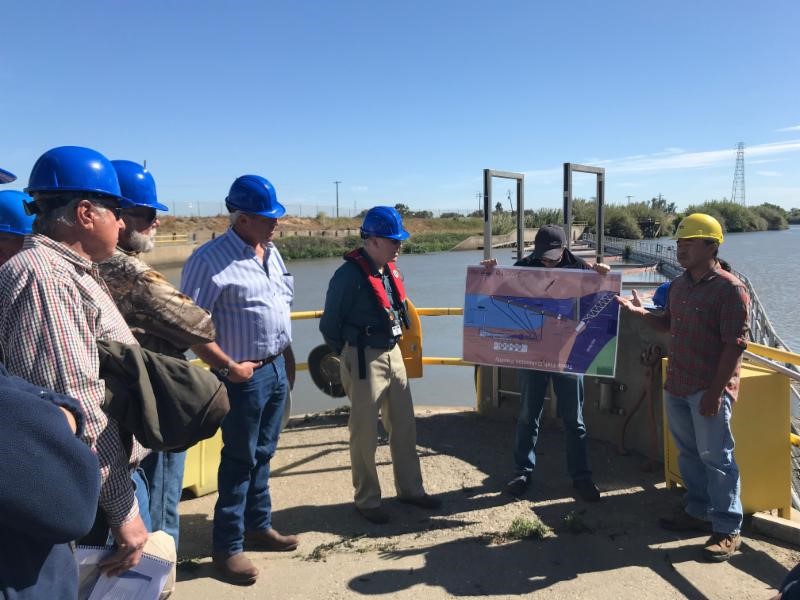 The San Luis Delta Mendota Water Authority held its board of directors meeting on Thursday, October 10, 2019. You could feel fall coming on this morning. There was a chill in the air and there is cotton out there. Not like it used to be but there is some. I’m pleased to tell you WaterWrights.net’s readership is growing and with that in mind I want to take a moment to define a term; at least as how I use it. Joint Power Authority, JPA, is a governing structure common to special districts in California. San Luis Delta Mendota is a JPA of 28 districts relying on water supplies from the Delta Mendota Canal. The Friant Water Authority is also a JPA of districts who get some or all of their surface water from the Friant Kern Canal. Canals seem to be central to the purpose of these organizations.

With that in mind we’ll detour a bit from San Luis to Friant. When I started going to water meetings about 20-years ago there was the Friant Water Users Authority. Then there was a schism. Friant broke into two parts; the original FWUA and the newer Friant Water Authority. The only real difference was the FWA had two less members who didn’t join the new FWA (all of these were JPAs.) Eventually the two members joined the FWA and the FWUA was disbanded. During the latest drought a few years ago the tensions rose anew and this time the FWA split into the Northern Friant Alliance and the South Valley Water Association. The FWA remained the entity in charge of Operations & Maintenance on the Friant Kern Canal. Or to say it differently but just the same; the FWA kept the O&M on the FKC. Eventually the northern folks rejoined the FWA. So far the South Valley WA has lost two members: Teapot Dome ID and the Lower Tule River ID have quit South Valley and rejoined Friant. Or, at least they are in the process of doing so. As you can see JPAs can be enduring entities. SLDMWA has had more unity since its inception in 1992.

Chairman Cannon Michael called the meeting to order at 9:30am and we saluted the flag together using the phrase “Under God” in all it’s glory. We then introduced ourselves to each other and there were no public comments or changes to the agenda. The consent calendar was approved without comment.

The first action item was presented by engineer Joe McGann representing the Grasslands Bypass Project. The board was asked to adopt the CEQA and NEPA findings of the project; each by resolution. The project reduces the amount of undesirable constituents flowing back into the San Joaquin River and the board adopted the resolutions.

SLDM consultant J. Scott Petersen updated the board on the need for money to go to the Voluntary Agreements. Many Central Valley Project and State Water Project contractors are pitching in to help the furtherment of the science on the VAs. The cost was $30,000 and that was a good price I guess because the board was A-OK with it.

Petersen continued his roll saying the first annual SGMA report will be due this coming April. When the budget was put together about $145,000 wasn’t considered because the five-year report work was overshadowing the more immediate April report. Once again Petersen talked them into spending more money.

Yet again Petersen reported; this time on legislation. He said Washington DC is back in session and he’s been speaking with Congressman T.J. Cox about subsidence and other matters of concern. Former NRDC satrap and now Congressman Jared

Huffman is working on a water bill and most of the goodies being sought from the feds will be tied to this bill. On the state side the Water Resiliency submissions have been submitted to Governor Gavin Newsom’s office. The San Joaquin Valley Water Blueprint is a part of this and will be released for public comment at the end of this month or early in November.

Executive Director Federico Barajas spoke about the San Luis Reservoir’s B.F. Sisk Dam seismic retrofit and expansion. He been talking with the Army Corps of Engineers and there are more discussions needed with the US Bureau of Reclamation. He wants a game plan that keeps things on an even keel with the Bureau. Barajas asked Santa Clara Valley WD’s Director Gary Kremen about the Pacheco Reservoir and he said there has been an agreement with San Benito County Water Agency that can serve as a template for others interested in partnering. Westlands WD General Manager Tom Birmingham said he’s been speaking with Senator Diane Feinstein about getting some federal funds in the middle of the Pacheco project. Barajas said the Sites Reservoir folks would like to give SLDM’s board a presentation and he’d like to get the board’s by in. WWD’s Director Don Peracchi said that would be a good thing. Banta Carbona WD Director Jim McLeod said the problem with winter run salmon isn’t lack of cold water or exports; he believes the problem is also in the fishery management in the Pacific Ocean.

Birmingham told the board about the recent legal problems WWD has had with trying to get a CEQA on the raising of Shasta Dam. Most of our readers may be aware the State of California sued to block Westlands from continuing the CEQA process and won. Birmingham said WWD is actually an agency of the state, that was one reason the state was able to get the upper hand. In the Attorney Generals complaint the AG said state agencies will have to review the CEQA process and documents and that is just too time consuming and expensive. Interesting the state finds complying with its own laws too complex and costly but is OK with forcing citizens to do so. Bottom line WWD is still pro-Shasta raising and there are other avenues for getting an official examination of the pros and cons of the project.

Tom Boardman gave his always thorough water report. He said the Bureau and the Department of Water Resources were going to be operating at different X2 lines. The X2 line is a location that establishes saline intrusion into the Delta. The further downstream the X2 line is set the more flow is required to hold the salt back. In the natural state of things before any dams were built in California salt water would routinely intrude upstream as far as Sacramento and Stockton in dry years. So I have been told. This would have forces the state to pump far less. Now the Bureau will comply with the more stringent state X2 line. This has reduced pumping on both the state and federal sides. Boardman said there is a storm expected next week with more to follow and he sees San Luis Reservoir possibly filling. The storage at SLR is 150 percent above normal so that will help.

Barajas spoke about the Jones Pumping Plant saying staff has been able to disassemble Unit Two so the contractor can rewind the motor next week. He said SLDM staff has done an outstanding job of preparing the necessary pre-wind and things are ahead of schedule. On the Delta Mendota Canal subsidence studies are gearing up and things should be rolling by the first of the year.

Chris White, Executive Director of the Exchange Contractors is also the chair of the O&M Technical Committee and he reported on who will sit on that committee. Barajas said there are vacancies that need to be filled.

Barajas then gave is XO report saying long-term water transfer parameters are well underway and to keep an eyeball peeled for a joint press release with the Bureau and SLDM. He also said the Mid Pacific Region of USBR has been renamed by the Department of Interior as the Interior Region 10 of the California Great Basin. Just rolls off the tongue. A brief survey was

handed out to the directors and attorney Becca Ackroyd to help and ensure enough legally required training is being provided by home boards.

Michael pointed out Mike Wade of the California Farm Water Coalition who said the CFWC produced 28 op eds drumming home the warning of SB1’s possible, toxic unintended consequences. SB1 was vetoed and Wade wasn’t claiming the victory or swaying Newsom; just helping keep the discussion going. More good news; CFWC is coming up with new banners. San Luis WD Director and ACWA Board member Bill Diedrich announced tomorrow there will be an ACWA Region Six & Seven meeting in Visalia tomorrow and it is sold out.

Board member reports were the last item before closed session and there were none; so that was that.

SAN LUIS & DELTA-MENDOTA WATER AUTHORITY was established in January of 1992 and consists of approximately 2,100,000 acres of 29 federal and exchange water service contractors within the western San Joaquin Valley, San Benito and Santa Clara counties. The governing body of the Authority consists of a 19-member Board of Directors classified into five divisions with directors selected from within each division. The main conveyance is the Delta-Mendota Canal that delivers approximately 3,000,000-acre feet of water within the Authority service area. Of this amount, 2,500,000-acre feet are delivered to highly productive agricultural lands, 150,000 to 200,000-acre feet for municipal and industrial uses, and between 250,000 to 300,000 acre-feet are delivered to wildlife refuges for habitat