The North Kings Groundwater Sustainability Agency Advisory Committee held a remote meeting on GoToMeetings on Friday, September 11, 2020, also known as Patriot Day in honor of the those we lost on 9/11 in New York City and Washington DC. Chairman Scott Redelfs called the meeting at 1:30pm and NKGSA Executive Director Kassy Chauhan gave roll call. The committee members, staff and members of the public were asked to speak up and be recognized. Actually, Chauhan had to read through the procedural niceness needed to run an online meeting. It took almost 10-minutes to get to the first action item and the minutes were approved. It didn’t sound like anyone from Biola or Kerman was present but there were enough members to hold a quorum and the minutes were legally approved.

Engineering Consultant Ron Samuelian gave a basin coordination update saying there is a new $5million grant that has a heavy bent towards helping the universal right to water and disadvantaged communities – DACs. Unfortunately Samuelian was kidnapped mid-sentence by a mad scientist and his vocal cords where surgically removed and replace with robot vocal cords and then everything went silent. Then the online connection to the meeting was lost. I’m beginning to believe perhaps the problem is on my end and Samuelian wasn’t kidnapped after all.

This is the first time since the Big Marxist Virus struck I’ve lost my internet connection while working from home. This is also the first time there was a big Creek Fire and since my internet is line of sight there could be a problem with one of the transmitters on a hill side somewhere.

So with no internet and no physical location where I could attend the meeting, I shifted my

attention elsewhere. I live very near the base of the Sierra Nevada Mountain Range east of Fresno, California. What you might call pre-foothills. One of the largest fires in modern California history, the Creek Fire is centered 28 miles northeast of my home. The fire started five days ago and has burned 176,000 acres of land and forced thousands to evacuate. Families have to flee their homes and take what belongings they can.

It’s a very rural area and folks have livestock by choice. In addition to ranchers there are smaller homesites with livestock; horses, donkeys, mules and 4H/FFA cattle, sheep, goats and even llamas. All of these animals have to be evacuated also. There’s no one cruel enough to abandon an animal to burn to death or die of smoke inhalation, thirst or starvation if that animal can be saved.

So, instead of writing about the North Kings GSA Advisory Committee I went and took a look at some of the holding areas for livestock evacuated from the fire.

Kermode is the former Police Chief of Tehachapi and has a little experience with staying cool in a tight spot as well as knowing what a good PIO does – give information. He said the rodeo grounds facility is about 95 percent full but they could expand the capacity if the need arises. There are other evac centers and Reedley College is prepared to open its facilities if necessary.

“The community has been wonderful,” said Kermode. “The Clovis Rodeo Committee and the Clovis Police Department have been very attentive and helpful. Our two biggest needs for donation are cash and feed.”

A 150 head of livestock goes through a large amount of hay. They also need veterinary supplies, therefore cash.

Shelter Manager Leslie Harris of Fresno also said the community has been very supportive. I don’t know if she wants me telling this or not but she works for DiBuduo & DeFendes Insurance also of Fresno. She was grateful they gave her time to attend to this 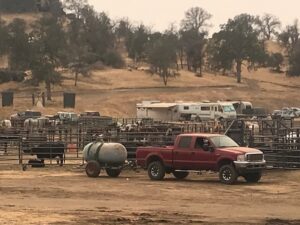 important work. Harris was helping Rosie Echeverria of Hanford who was dropping of bottled water for the CCADT volunteers. Echeverria works at Fresno Pacific University and she and her husband were in town and chose to donate some water to help the efforts.

Kat Penman of Prather was at the rodeo grounds with her mare Whiskey and her gelding Cody. The two pintos were in good shape and Penman was too, considering everything she’s been through this past week. Penman, her husband and young son are staying with relatives in Fresno while they await word on the fate of their home. Penman, who is also six month pregnant was shoveling out pens and feeding her horses. Country girls are tough.

Kermode had encouraged me to contact Naomi Tobias, founder and CEO of CCADT. I called but she was too busy to answer the phone and I figured she was pretty busy and I didn’t want to be the stereotypical pushy reporter. Tobias is from Fresno where the CCADT is headquartered and you can find more information at www.ccadt.org or call 888/402-2238.

My next stop was about 10-minutes from my home, the Double SS Horse Ranch very near the intersection of Tollhouse and Sample Roads. The Double SS made the Clovis Rodeo Grounds look more like a retirement home for horses than a rodeo grounds and took some doing. The Double SS had trucks, trailers – both livestock and camper – golf carts and 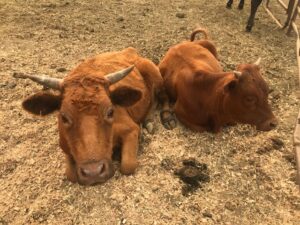 walkie talkies, food tents and kids. I walked over to a man who looked like he might be in charge and there was a young lady laying on a stack of 40 pound dog food sacks sleeping nearby while young children tended to a pen of ducks. It would have made a great photo showing the exhaustive toll on adults and the resiliency of children. But as I wrote above country girls are tough and it didn’t strike me as gentlemanly to take a photo of her sleeping nor did it seem like a good idea to wake her up and ask permission to take a photo of her sleeping.

The gentleman introduced me to his daughter Mrs. Alex Simpson and took off somewhere before I could catch his name. Simpson and her husband Derrick are proprietors of the family owned 160 acre ranch. With a cellphone in one hand, a walkie talkie in another and a constant stream of folks coming up to her with questions and information she found the time to graciously answer my questions as we walked about the sprawling livestock pens. The cover photo of the mule? His name is Dear John and Simpson said he may well be the most polite creature on the entire ranch. 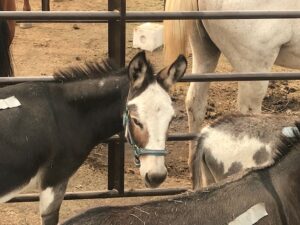 The Simpsons haven’t been getting much sleep since the evacuees began to arrive. There are very close to 500 animals being taken care of at the ranch with possibly more on the way. I asked Simpson how their place got so popular.

As it turns out Simpson is a top ranked barrel racer. In fact the California finals for the National Barrel Horse Association were going to be held at the Double SS on the weekend of September 12th and 13th. In preparation for that event several panels were brought in to construct stalls and the grounds were prepared for a large gathering of horses, trailers and facilities for folks staying in campers for the weekend event.

As the evacuation orders started the barrel races were cancelled and the Simpsons posted on the Double SS Ranch Facebook page they had space for livestock. The word quickly spread through the mountain and foothill community. While I was speaking with Simpson I heard someone tell her the Double SS Ranch’s list of needed goods was being read on the Ray Appleton Show, KMJ 580AM. I imagine other news outlets reporting on the fires may have included Double SS Ranch’s efforts as well. The Ranch has a shower being used by 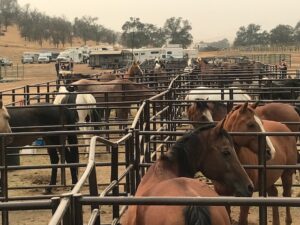 livestock haulers and first responders. Firefighters and PG&E crewmen are stopping in to get food and a chance to rest without having to travel back to Clovis and Fresno. CalFire posts updates at the ranch to help keep folks informed. I was told by both Kermode and a veteran firefighter at the Double SS studies and real world experience show lives are saved when people can take their animals with them in an evacuation.

There’s a Go Fund Me page that has raised $26,000 so far. That’s good because the rescue efforts are going through a squeeze of hay a day. Simpson said they need hay, but not just any old hay. Alfalfa and grass hay is needed for the equines who unlike the bovines, ovines and caprines are not ruminants. Veterinarians and others with closely confined livestock experience have been making regular inspections to prevent any outbreak of disease.

For more information about the Double SS Ranch go to: https://www.facebook.com/search/top?q=double%20ss%20horse%20ranch

So, here’s the sad fact about all this. Some of these horses (and other animals) may be at the evacuation pens for a while. If a homeowner loses their home, barn, corral and all the property is ash and charcoal, no feed for livestock, where will they take their horses? There are animals at the evacuation sites whose owners are unknown.

As I write this the update on the Creek Fire is that it’s six percent contained. God willing 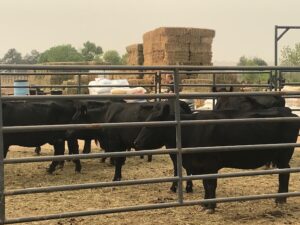 and I believe He is, pretty soon the fire was be put out. The smoke will clear and the air will again reveal a blue sky. The rain and snow will come sooner or later, the grass will once again grow green on the hillsides and the forests will repopulate. Before you know it we’ll be in the midst of what looks to shape up as an election full of vitriol. Our attention will be elsewhere. But these animals will still need hay. Right now, while the sun shines like copper through the sooty air and you can walk outside and smell smoke from an seen fire burning over the horizon, before those families even start to try to rebuild their homes – now is a good time to give. Set up a storehouse for those folks now to draw from when other pressing matters district us.

I’m a bit cynical about most of the causes I see these days. I don’t consider myself an “animal lover” although I’ve cried a lake of tears over horses, burrows, dogs and cats. I was young but I’m pretty sure I cried when Bambi’s mother was shot and I know I did when Old Yeller met the same fate. 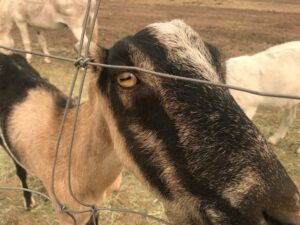 However, the appeal to emotions from self-righteous animal rights activist groups with celebrity shills virtue posturing turns me off. This isn’t that.

Helping to care for our neighbors’ livestock is helping to care for them. It’s one less burden bearing down on them. I see the folks caught in the path of this fire sharing a lot with my regular readers. They have the regulatory deck stacked against them. They are by and large decent people who don’t buy in to the postmodern relative truth philosophy and are as self-reliant as you’ll find anywhere. Getting help to the livestock ultimately helps them, people. Just like getting water to the crops in farmers’ fields, orchards and vineyards ultimately helps people.

Well, that strayed off topic from a GSA advisory committee report but I hope you saw a different side of some of the things going on with the fire. Thanks for reading this.