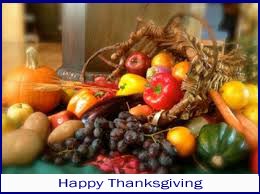 Hello, all of us at WaterWrights.net want to wish you a happy and blessed Thanksgiving. I few years back I married a lady from Acadian. Acadian is the portion of Louisiana where the Cajuns live. I’m spending my Thanksgiving here, in and near Lafayette. My wife 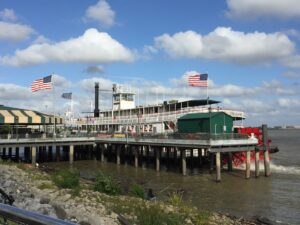 Deborah and I have a home in Cecilia; a town of about 1,000 souls located just west of the Atchafalaya Basin (a big swamp from overflow of the Mississippi River) on the banks of Bayou Teche (a small, muddy river or a large, muddy stream).

I’ve said this before many times – the Cajun are the original foodies. They come from French Canadians the British pushed out of the Canadian maritime provinces around 1800. Adapting their French culture to the forests, swamps and prairies of southern Louisiana they developed a cuisine of their own. After many incredible meals I’ve come to the conclusion you can give a Cajun an old boot, a piece of tree bark, a bit of rice and spice and get something delicious in return.

In preparation for this trip I made contact with the St. Martin Parish Farm Bureau and they hooked me up with their president Mike Melancon; the “c” is pronounced like an “s” and that’s one of the easier names for me. Who knew Herbert is pronounced A-bear? And of course there’s all manner of names and placed ending in “x”. You turn on the radio here and you can find folks speaking in French. 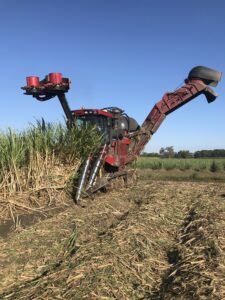 Melancon is a sugarcane farmer and chairman of LASUCA – the Louisiana Sugarcane Cooperative headquartered in St. Martinville also along the Bayou Teche. I could walk about a fifty yards west of my backdoor, get in my pirogue if I had one and float downstream 15-20 miles and end up at the St. John Sugar Mill.

Instead of floating I had the pleasure of riding along with Melancon as he checked in on the harvest and then we took a tour of the sugar mill.

Sugarcane is a grass, related to bamboo and grows in wet, tropical climates. Louisiana is right on the edge of being too far north as it can freeze here. It’s as rare as in Fresno but there was snow here in 2018. In general there is plenty of rainfall and therefore no irrigation as we know it in California. In fact they often have too much precipitation thanks to hurricanes. Melancon told me the recent Hurricane Delta had moved through fast enough to avoid much flooding but the winds caused the canes to blow over and sure enough the stalks where tilted. That doesn’t impede modern harvesters which pull the cane into chopper where it’s cut into about six inch lengths and moved into a hopper that 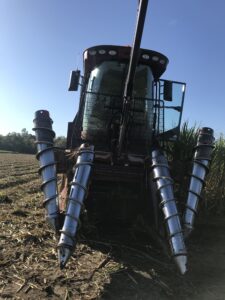 transfers the cane to a truck that transports it to the mill. In the old days cane was cut full length and then reduced at the mill. This still happens but most harvesters are choppers.

There are several varieties of sugarcane and more always under development. Melancon sets aside a portion of his fields for I guess you’d call it root stock. Cane is like Bermuda grass and can sprout roots from segments. This root stock is chopped up in short lengths and distributed across the prepared field where it takes root and produces a crop. This same planting will continue to yield viable crops for four to five years and then need to be replaced. Melancon told me the first year’s crop is the highest yield and results decrease thereafter. Once the field is harvested it is common to come back and burn the remaining above ground stubble. This helps 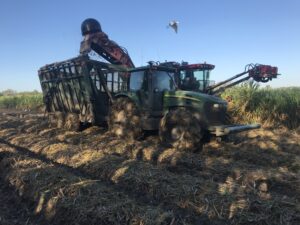 discourage mold and other problems with the left over waste. Sometimes a grower will burn a field before harvest to remove an abundance of leaves.

The air quality here is pretty good and the State of Louisiana treats its citizens much more like adults capable of deciding right from wrong without the guiding hand of bureaucratic regulation than does the State of California. So, yeah there’s some ag burning going on and it takes place without official state sanction. Sugarcane is also relatively pest free so there isn’t a lot of pesticides needed. Melancon stressed to me all the sugar grown in Louisiana has not been genetically modified. There’s no Roundup Ready sugarcane.

After showing me around his fields Melancon took me to the LASUCA sugar mill. The St. John Plantation was several thousand acres of sugarcane and had its own mill. In the 1970s the St. John family sold the mill and the cooperative was formed. When you drive by the mill there’s a warehouse the size of a small mountain and the mill is comprised of huge, corrugated metal buildings connected by a Rube Goldberg looking contraption of pipes spewing steam. We were met by General Manager John Herbert and joined by brothers Joe and John Darby owners of Joe Darby’s Ag Chem Sales in Arnaudville. 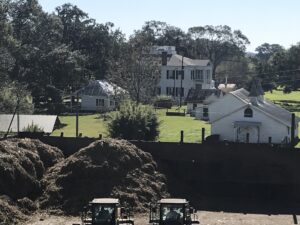 When a load of sugarcane arrives a random sample is taken to the lab where it’s juiced. The juice is analyzed and averages everyone can live with are allocated to the coop. There were two types of trailers delivering the cane; side dumps and end dumps. A side dump tailer does just like you’d think – it dumps from the side. The end dump is much more fun to watch. The entire truck and trailer is hoisted up on a hydraulic ramp to about 60 degrees and the load falls into a pit. The cab of the truck is at least a couple of stories in the air. Herbert told us drivers are issued a roll of toilet paper they can use as a pillow as they look up into the sky or maybe they have other needs. I halfway believed him until I saw the drivers step out to a covered shelter and wait for their truck to get level again. 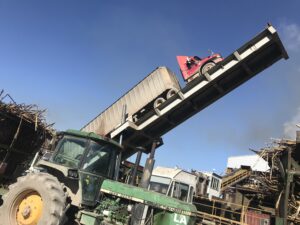 The cane is then put on a conveyer belt and dumped into big drums full of sharp knives where it is cut into small pieces. These pieces are then ran through five crushing rollers where the juice is squeezed out. After as much juice as possible is extracted what’s leftover is cellulose. This is dried and becomes bagasse which I had to look up in the dictionary after the tour because it sounded like they were calling it badass. Bagasse is flammable. Herbert told us at the very start of harvest the plant is run by natural gas but soon there is enough bagasse to power the entire plant. The bagasse is burned to create heat for a boiler system which in turn powers generators that produce electricity and in some cases I believe there are steam powered pistons. It’s an incredibly efficient system and contributes to the mill’s profitability. 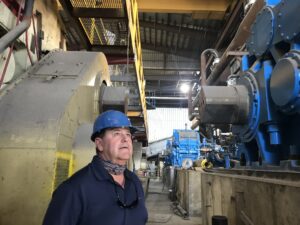 The sugar juice is heated up to cause excess water to evaporate. At this point you have either cane syrup or molasses. I have to confess even though the difference was explained to me I really didn’t grasp the concept. In any event part of the liquid is containerized and most of it goes to the striker.

The striker is probably the most interesting part of the process. Back when milling sugar was a more human labor intensive act a large metal cauldron was used to boil the juice. Sugar crystals would form on the sides of the cauldrons and someone would strike it with a hammer to knock the sugar off. Today there are silos 10 feet or more across where sugar crystals are introduced to the liquid under heat. This causes a chain reaction. The introduced crystals are a catalyst for further crystal production. There are rods that run into the silo and they can be pulled out to take samples. Smears of this gooey substance are placed on slides and inspected by a magnifying glass. The striker determines if the crystallization process is complete or if 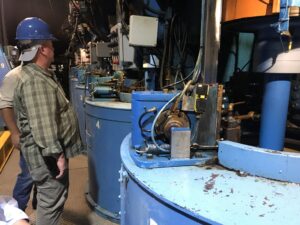 there needs to be more heat or humidity or how much longer to allow things to continue in silo. What I found interesting about the strikers was not a single one of them spoke English. They all speak Spanish and come from Latin America, mostly Mexico. There wasn’t an American striker in the lot. The work is hot and humid and noisy but the hermanos have the market cornered and I believe are well compensated.

Once the striker gives the OK the mixture is sent to dehydrate. The drier sugar crystals are then sent to centrifuges, which resemble industrial sized washing machines. The sugar starts spinning around at high rate of speed and water is sprayed to remove more of the molasses. The crystals are again dehydrated and now they are ready for storage. A truck loads the sugar and drives it across the street to the huge warehouse where gigantic skip loaders feed it into snow blowers that create a mountain of sugar. The sugar is now almost

white but it is not food grade. We ate some anyway but the final step is to send this raw sugar to a processor near New Orleans where it undergoes further stuff I don’t know about and is packaged. I left a few things out about the growing and processing of sugar but without a doubt it was one of the most interesting tours I’ve been on.

Melancon says sugar is still a good crop with a good market. He’s a third generation sugarcane grower and his farm is as sophisticated as any you’ll find in California. He has very expensive and specialized equipment to maintain. Employees to manage. Soil and weather conditions to contend with. He said LASUCA was formed by the merger of two separate coops when he was in his earlier farming days and it wasn’t a smooth holding of hands and singing kumbaya type event. Urbanization is 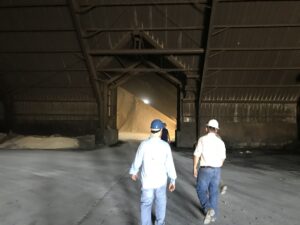 intruding into traditional farmland. Melancon said running a landplane over your field attracts real estate developers. And while he doesn’t have to deal with US Bureau of Reclamation contracts, a Louisiana legislature hostile to agriculture or an effete in-state press corps trying to shut him down – he still has to produce a crop. But Melancon is an American farmer and we know that means he has the determination and self-reliance to get the job done. So this holiday season when you bite into that pie or cake or cookie don’t forget it was a farmer who made it sweet.