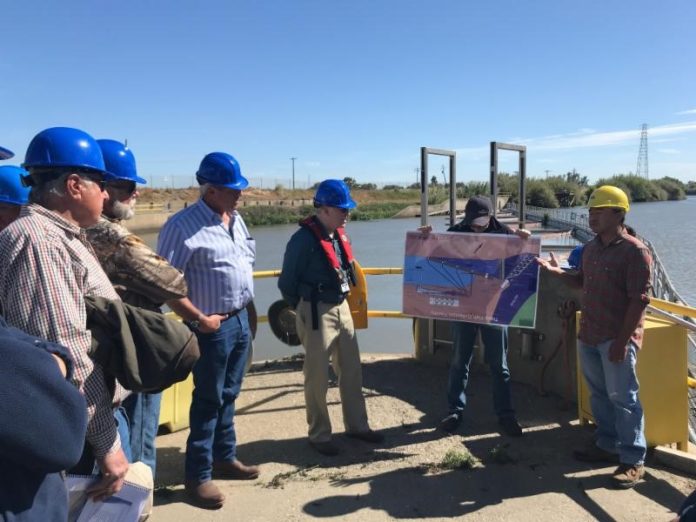 A Day on the Delta

The South Valley Water Association organized a day-long tour of the Sacramento-San Joaquin Delta for area growers to hear from delta and fish experts. What did they learn?

People can talk about “the Delta” all day long. But there’s nothing like actually seeing it up close to understand what the Sacramento-San Joaquin Delta really means to California’s elaborate plumbing system.

“I never really thought about the Delta,” said Kelley Hampton, a life-long farmer and board member of the Delano-Earlimart Irrigation District.

Hampton spent a day earlier this month with several other South Valley Water Association growers touring the Delta and learning about what’s working, and what’s not, for native fish species and seeing first hand the complexities of the ecosystem.

“I used to be one of those guys who thought the Delta didn’t affect us because our water didn’t come from Shasta, it comes from our mountains right here,” Hampton said. “I found out different a couple years ago when the Exchange Contractors took our water.”

It was all part of the [US Bureau of] Reclamation’s Central Valley Project, which ultimately brought San Joaquin River water south via the Friant-Kern Canal to South Valley growers. Over the years, environmental laws set aside more water in the Delta for endangered fish, but South Valley growers didn’t feel that pinch directly. Until the drought worsened in 2014 and 2015 and Reclamation didn’t have enough water to fulfill its obligation to the Exchange Contractors.

In those years, the Bureau opted to use San Joaquin River water and delivered zero water to Friant contractors for two years in a row. (A lawsuit is ongoing over whether that was a correct interpretation of those contracts.)

“We needed to figure out what was going on,” in the Delta, Hampton said.

To that end, the South Valley Water Association has been organizing these day-long tours for the past three years so growers can see the inner workings of the Delta and get a good dose of background from Delta and fish experts. This go round started in the South delta at the Tracy fish facility and Clifton Court and then went north through the central delta and up the Sacramento River to Liberty Island and the Delta Cross Channel gates. The group was able to watch fish capture and tagging by Reclamation staff and see the route where the Delta tunnels are proposed to be built.

On this trip, the group boated through the Delta with biologists from FishBio as well as the Delta Water Master, Michael George.

“It was eye opening,” said grower Vince Sola, who farms in the Lower Tule Irrigation District. “I was amazed at how much water is in the Delta. There’s a lot going on up there.”

Hampton said what was most surprising to him was how few native fish are actually in the Delta and what’s really killing them – mostly non-native predator fish.

“The FishBio folks told us that even increasing the limit on (non-native) striped bass by one, could probably help the problem. But (California) Fish and Wildlife isn’t interested,” Hampton said. “So the striped bass are eating the fingerlings and, in some cases, 98 percent don’t make it to the ocean.”

As for Michael George, Hampton said, “…he explained a lot that we just didn’t understand.”

George said he learned as much from the growers. “I was pleased to know the growers are very interested in both increasing water reliability and improving the Delta ecosystem,” George said. “Everyone understands that no water rights are reliable unless the environment begins to get better.”

And that doesn’t necessarily mean pouring more and more water onto one single fish, such as the Delta smelt and not having any result to show for it.

“I think there’s a growing movement in the scientific community that recognizes how Endangered Species Act laws, both federal and state, constrict activity, which is actually hurting the ecology,” George said.

For instance, there’s a push for Delta managers and stakeholders to take predicted sea level rise into account for planning purposes. But that, in itself, creates controversy.

As sea water intrudes further into the Delta, it will warm the water to the point the Delta smelt won’t be able to survive.

What should we do?

The ESA, which covers the Delta smelt, says we must focus all our efforts and resources to prevent further decline of that single species. We cannot hold back the ocean. So, again, what should we do?

George suggested a more holistic approach that takes these already approaching changes into account. “To me, that means at the margin we should at least reduce our emphasis on this extremely fragile fish that’s already in decline and is rapidly being replaced in a rapidly changing ecosystem,” he said.

Instead, focus on improving that ecosystem. He mentioned the highly invasive corbicula, or overbite clam, which eats up all the bottom food plankton interfering with the food chain. If we could fix that problem it would mean a better food supply for native fish, increasing their odds of survival. “But there are no tools in the ESA to deal with it,” [said George.]

Improving What We Can

It’s impossible to recover what the Delta was prior to California’s development. “But we can create circumstances for a healthy ecosystem that favors natives and reduces favorable conditions for non-natives,” George said.

It was a lot to take in for a single day-long tour and growers Sola and Hampton said they could both use more education. “That’s what the South Valley guys are trying to do, learn more so we can fight back,” Hampton said. “We didn’t even think about this stuff five or six years ago.”