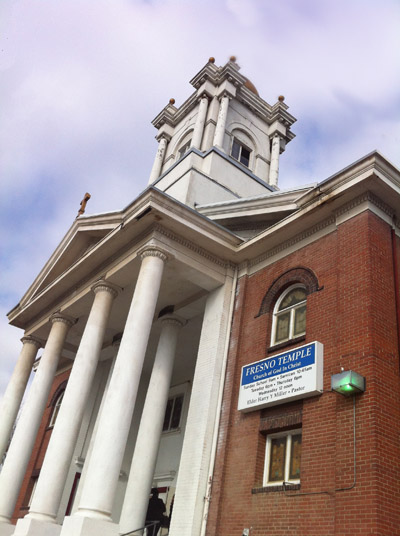 The Fresno Irrigation District held its board of directors meeting at its Fresno headquarters on Tuesday, June 20, 2017. It was hot and there wasn’t a lot of public turnout, but since in today’s meeting the board will also be sitting as the Board of Equalization. Chairman Ryan Jacobsen started things with a flag salute and the announcement the meeting will start as the Board of Equalizations. A gentleman from the audience spoke in public comment about his wishes to purchase a piece of property that FID evidently owns. I was not sure what that had to do with setting rates as the BoE but the rest of the meeting was finish in less than five minutes. There were no presentations directly towards the BoE and the board passed the resolution carving this year’s assessments in stone.

The actual FID board meeting began at 5:08. Under public presentation Rick Karkula representing seven supervisors from water agency employee unions – if I understood correctly – addressed the board about wages. It was a good talk folks were happy to communicate. There were no conflicts of interest and the consent calendar was approved.

Water Master Jim Irwin gave his report and said there is almost 900,000 a/f in storage at Pine Flat Lake. This year is the third or fourth wettest in FID history. The temperatures are well above average, even called extreme. The highs for the next week will all be well above 100 degrees so demands will go up correspondently. Although the runoff is huge this year the heat demands are taking water away from banking. So far this year more than 24,000 a/f have been banked and Irwin said the ponds are exceeding design. General Manager Gary Serrato reported on today’s Kings River Water Association meeting saying releases on the Kings River are high. Downstream flooding can take place but the Army Corps of Engineers has to make room for hundreds of thousands of acre feet of snow melt yet to come. I think he said 500 cfs from the Kings River will be pumped into the Friant Kern Canal by Boswell Farms. Getting the runoff under control could happen within the first two weeks of July. I’m guessing Boswell Farms, I don’t think he meant FID attorney Jeff Boswell. FID has a good problem this year in trying to decide how much and where to carryover. Director Greg Beberian asked Irwin why some of the flood-control basins on the north side of Fresno are empty. Irwin said Fresno Met Flood Control rotates them through maintenance in the summer. Some of the board wanted to have a talk with Met Flood about using the resources this year. Serrato said this is the same discussion they have every year.

Chief Engineer Laurence Kimura gave his report and said staff is busy checking developer requests and some High Speed Rail matters. The rest of his report was pretty much routine. A grower asked about taking water on private recharge areas for SGMA and Serrato said this is something being looked at but the exact accounting of the water isn’t clear yet under DWR. There were two special engineering requests to put in pipe where canals are and the board felt inclined to support the staff recommendations to update the facilities.

Assistant General Manager Bill Stretch gave his report and said he wants Operations Manager Adam Claes to talk about reclaiming right of way along canals. Over time farmers have been known to plant a little closer to the canals or roads by the canals start to degrade and space is lost. FID has been able to reclaim the space and protect the canals. Claes showed photos of many other repair projects. Stretch then spoke about the homeless encampments along some of the canals. He said trash builds up and in the middle of the water season staff is pulled thin. But this year all hands on deck for a big trash clean up. The Herndon Canal runs through the heart of town and it has a very wide right of way for removing silt. The City of Fresno wants to install a trail along the canal. This area is a magnet for dumping junk. There is a man named Michael Voight who has waged a one man campaign against FID with letters sent to everyone you can think of. FID is looking at gating as much as it can. But in the meantime the homeless are already back. Staff said Fresno Police are making arrests but the culprits get out the next day. Directors Jerry Prieto and Beberian were pretty angry. Everyone agrees the irrigation district shouldn’t bear the full costs of society’s mess of mental health and homeless crime.

Back to water – Claes showed photos the work on the Serrato Intertie Facility. It’s a big facility. It has four large pumps and it is named after Gary.

Stretch reported the North Kings GSA will be meeting this Thursday and it’s ready to open its website and reveal its logo. The entire Kings sub basin had six GSAs, now it has seven. Cities with the Consolidated ID’s GSA pulled out to form their own GSA. It is mess. The cities want their boundaries to go out as far as their spheres of influence and neither Fresno County nor CID is willing to go along with this. CID and the cities within its boundaries were described as, “not having a healthy relationship.” There will be a meeting with all the GSAs in the Kings Sub Basin this week where hopefully cooler heads will prevail. Nobody wants the State Board coming here.

Several years ago Bill Jennings, head of an enviro group that joined in on the San Joaquin River restoration lawsuit said what has happened to the SJR will happen to the tributaries. As a member of Friant North FID was asked to approve an ACWA resolution critical of planned through Delta flows not being scientific, not taking into account other stressors and raping the tributaries of their water supplies. It wasn’t a hard sell to get the board to agree.

Serrato gave his report and said he was overwhelmed by the support FID’s landowners gave the district’s recent 218 election. He also said there will be a Friant workshop coming up soon that will look at the California Water Fix and what position the Friant Division of the Central Valley Project should support. He wasn’t ready to lean either way until after hearing what is presented at the workshop. Also dealing with Friant is the subsidence on the Friant Kern Canal that could possibly reduce conveyance by 50 percent. He said it isn’t a popular view but he doesn’t believe FID growers should have to pay for a problem they didn’t cause.

Under administrative matters the board approved a $200 claim for a broken windshield. The board also passed a resolution allowing the district to enter into a 215 contract with the US Bureau of Reclamation. Serrato added during the canal clean up staff did a superb job and went above and beyond with some hot and dirty work. He said some of the homeless waved at him with one finger and he assumed it meant FID is number one. A couple of the directors suggested the guy writing the letters be put in charge of clean up. See how he likes dumping 51,000 pounds of trash in one day, some of it had used syringes and needles mixed in. I think I heard it costs $50,000 for one day of trash.

Under director’s reports Jacobsen praised Serrato and staff for developing the goodwill needed to pass the 218 election. Director George Porter thanked all the growers and said he’s heard no complaints. Prieto went to a risk management meeting recently where attorney Gary Sawyers presented to developers and lenders what SGMA means to them. He said it was also pointed out all the water saved during the drought through conservation equaled less than what flows through the Delta in one day.