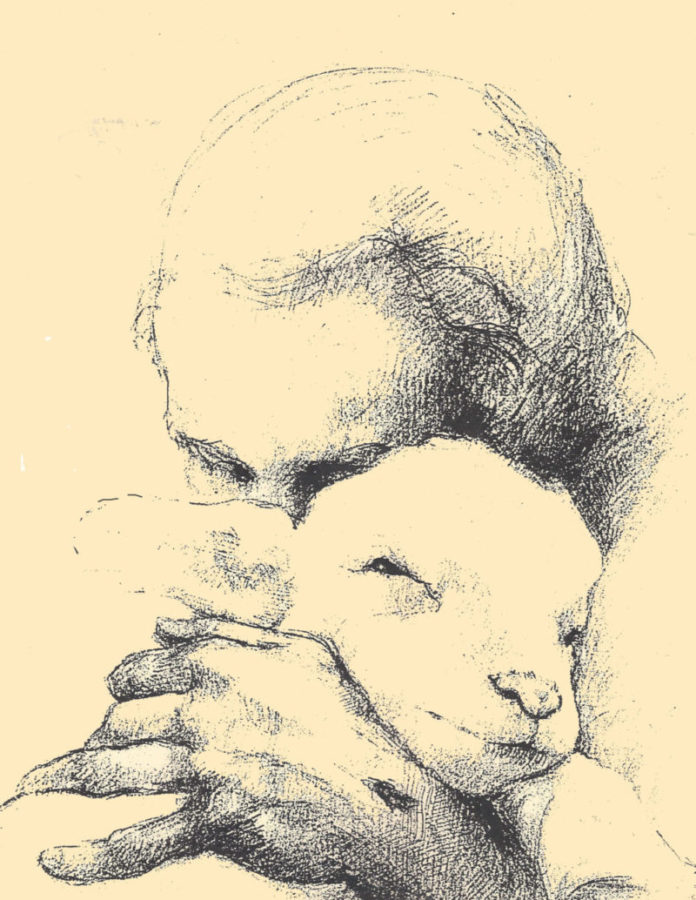 Publisher’s note: This piece first appeared in The Westerner Blog Spot on April 12, 2020 www.thewesterner.blogspot.com and is used by permission. The author Stephen L. Wilmeth is a friend of WaterWrights.net, ranches in New Mexico and has farming connections in the San Joaquin Valley. We thank him for his kind willingness to allow this reprint.

Days ago, in the green hinterlands of Lea County, some red gals were inspected.

They came to the pickup with expectations of cubes and were not disappointed. The auger, run off the PTO, was engaged and it ran a number of clicks. The girls gathered along the line of extruded cotton seed mix with their noses to the ground. We got out and walked among them.

They knew the routine.

It was a joy to be part of that New Mexico spring day. Green like a lawn, the landscape was a collage of colors. Bladder pod and primrose mixed with the filaree and awakening grasses. A sweet smell permeated the morning calm. In the mix, though, was something that reminded me of another time and place. Bending to pick a lateral, a sniff of it followed by tasting it proved definitive. It sure enough was what it was.

No, it wasn’t the sweet smell of the of the heritage reds in our midst chasing the remaining pellets, but it was a legacy of similar beginnings. The plant was brought west from the homelands of the early pioneers for a practical reason. The candy that was made from it by those pioneer wives was a reminder of their own childhood.

In so many places that combined milk cows, and this transplanted newcomer, it took root and settled in for the long haul. Those of us who were raised around it and drank raw milk knew the consequences of the milk cow getting into a stand. The first sip of the fresh milk was the clue. It would wake you up if there was any lingering morning lethargy.

Oh, no! The milk cow’s been in the horehound again!

We are all in new territory today.

If we opt to observe the pandemic protocol, there will be no family gathering, and no church services. Easter without either is inconceivable or at least it once was.

Don’t kid yourselves. Everything has changed. This economy has been disconnected from dynamic, live support, and there is no model anywhere to suggest the outcome of the eventual startup. On this upcoming opening day, there is no way the turnstiles will turn as if nothing happened. Too much of this world will not have the pocket change to buy the tickets. Too much of this world will have second thoughts about venturing forth from quarantine to cheer and toast to a future. And, too much of the world will be amazed how much their habits and daily routines will be systemically altered.

The idea of going home has appeal, though. Easter and home appear in mirrored image in this visage.

There were two little white churches in succession. One was actually the old club house where we met as friends and family. On the ridge line to the west was where the sunrise services were held for such an important day as the celebration of His Resurrection, the second but most important seminal event of our Christian faith. Those memories are reassuring and peaceful.

The second place of worship was the little white church under the hill. The church family had grown and prospered enough to have a dedicated house of worship. The first marriages, funerals, and Sunday school come into focus there. Mary Jane Woodrow was the first, and, without a doubt, the single person who set the stage for all Sunday school comparisons henceforth. She was a living saint.

Reverend Ogilvy was the preacher who shepherded the flock, but the foundation of support for children of such young age was the collection of family and friends that remain so clearly delineated in archives of decades since.

Attendance was regular and routine in that Gila Valley time of life. That would change with years and times, but the importance of Easter didn’t.

There were externalities … He is Risen!

And, that brings us to now, to this day, and the uncertainty of our surroundings.

At a time when all seems changed and foreign,

there must be some things that never cease.

Praying for so many of us should be the starting

point of constant reminders of His promise of peace.

For, why are we here if this is nothing more than a

marathon of turmoil, confrontation and grief?

Then, along comes a bug that keeps our churches locked,

It is confusing isn’t it? Especially when tragedies grow daily

with rising unemployment and general downturn.

businesses they created but now face the specter of ruin.

Perhaps, though, the times we face are much more than

a failure of earthly expectations of any measure of gain.

that it was His son that endured the greatest pain.

It was for us that pain was accepted and endured. It changed everything. From it came salvation and the only promise that makes sense. Indeed, we should seek those that believe as we believe. We should seek peace as well, but I freely admit I am confused about too many things. As has been stated hereinabove, too often the milk cow slips into the horehound patch and disrupts the taste of things to come. For example, when Jesus was talking to Pilate in John 18:36 He admits His servants would fight for His release from the ghastly torture He would face If (His) kingdom were of this world.

Pilate could find no fault with him and told his tormentors so.

The scripture, though, introduces the admission by Jesus that His servants, us, would fight for Him if His kingdom was here. Perhaps the real celebration this day is to pray the prayer of that return.

Stephen L. Wilmeth is a rancher from southern New Mexico. He is Risen, Indeed!