If You Can’t Beat Them, Eat Them 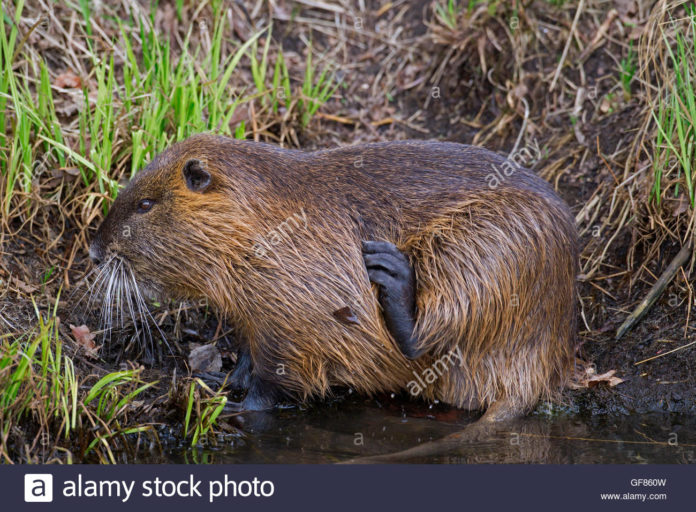 To an electric guitar enthusiast Myocastor coypus sounds a little like a failed attempt by Leo Fender to launch a new model in the vein of the Stratocaster or Telecaster. It’s actually the taxonomic name for a large, South American water rodent more commonly known as the nutria. According to California Fish & Wildlife they were originally introduced to California in 1899 for the fur trade but it didn’t take off economically. However, by the 1940s the “river rats” were in the Central Valley and Southern California. By 1970 they were eradicated. They are voracious eaters of plants and their burrowing causes canal and levee breaches.

Well, they’re back. Nutria have been in the news recently due to sightings in the California Delta and northern San Joaquin Valley. While this may not be great news for anyone who is having plants eaten and ditch banks broken there is a silver lining of sorts to this furry cloud. Nutria are edible.

In the 1930s nutria were introduced to Louisiana, also for the fur trade. Many escaped into an ideal habitat. You can’t walk 30 feet in a straight line in southern Louisiana without falling into a bayou or a swamp. It’s very wet there. It’s also home to some of the best food on earth. Having been there more than a few times it’s my observation those Cajuns and Creoles are either cooking or eating or talking about 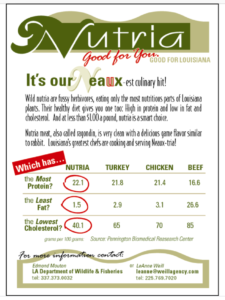 cooking and eating. I will attest one can just about walk outside and gnaw the bark off a tree and it will taste good. One of the things they eat is nutria. But due to the French influences it’s known as le ragondin.

Le ragondin are also a problem in Louisiana. They still eat plants farmers would prefer them to leave alone and burrow into levees. And even though they can carry the same nasty diseases as other mammals including man they are actually very clean animals. They’re herbivores and only eat plants. There is a website: www.cantbeatemeatem.com with recipes and tips. It states, “. . . nutria is among the healthiest meats to consume.”

Chef Philippe Parola said, “My friends and great chefs Daniel Bonnot, Suzanne Spicer and John Besh helped convince a majority of consumers that nutria meat is very high in protein, low in fat and actually healthy to eat.” He continued, “With the help of Mr. Noel Kinler and Edmont Mouton of the Louisiana Department of Wildlife & Fisheries, we cooked nutria stews, nutria soups and roasted and grilled nutria at many functions. Today more people are eating nutria than ever before.”

One can also earn income from nutria fur. The CDF&W website (in comparison to the Louisiana Department of Wildlife & Fisheries website) make it sound like just looking at a nutria will cause your body to become disease riddled to the point a skeleton in a black cape carrying a scythe will come knocking. There’s something about the folks who run California’s government – they get panicky over seasonal variations and changes in the weather – let alone an aquatic rodent. By the way, nutria don’t eat smelt. Back to my point, nutria are absolutely covered in fur. This fur gives them a beaver like pelt. The average price of a nutria pelt in 1981 was $8 per. Unfortunately the market ain’t what it used to be, but there is still a market. Louisiana DW&F has a website titled simply www.nutria.com which offers free online fur trapping education, training and workshops. Not only do they cook differently in Louisiana they regard natural resources as resources; something to be used wisely not molly coddled.

So, le ragondin are here again. California farmers lead the world in providing food and fiber for clothing. Nutria are a source of food and clothing. Perhaps there’s a way to turn this problem into an opportunity. C’est la via.

scraping the bottom of pot to remove all the goodness.

A word from our sponsor: