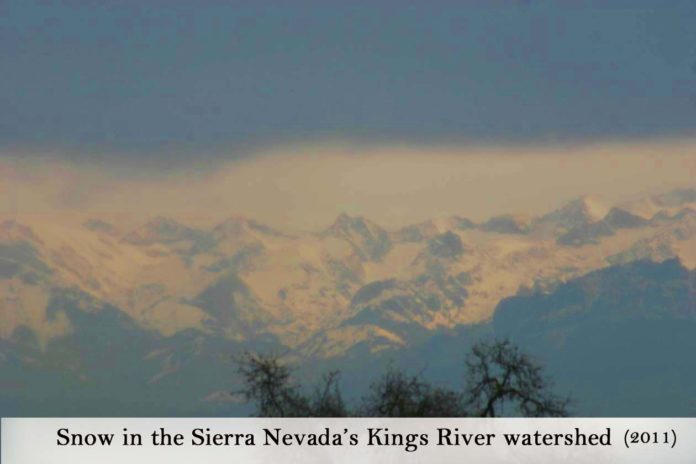 The Kaweah Delta Water Conservation District held its Tuesday, January 8, 2019 board of directors meeting at its Farmersville headquarters. If the water world were a social affair this would be the first event of the season. It’s been raining and it’s true; ducks and farmers enjoy the rain. So, everyone was in a pretty good mood as I write this. Of course, I’m writing this before the meeting starts. There is also an uncertainty with the change in government to consider. Will the new Governor Gavin Newsom keep his campaign promises to help the Valley? Will Nancy Pelosi and her gaggle of foul mouth leftists vow of resistance spill out onto Valley ag? But there is snow on the mountains so it can’t be that bad.

Chairman Don Mills called the meeting to order at 9:00 am and the auditors took the stage. KDWCD had cancelled the December 2018 meeting; foiling the auditors’ plan to give this presentation last month. I apologize for missing the CPA’s name and firm but this is their second year of performing the audits. They gave Kaweah Delta a clean report and the board approved the audit. The presentation took like a half hour, oh my.

The next item was short. Mills and Director Brian Watte were appointed to represent on the Longs Canal Company. I think I heard this entity has an annual meeting that has never lasted more than 10-minutes.

Water Master Victor Hernandez gave the Kaweah River report. General Manager Mark Larsen said there could be some delay with the February 1st NASA Airborne Snow Observatory flights due to government shutdown. That’s not carved in stone but if it’s not that its another thing. Every year an Army Corps of Engineers employee has to be reeducated about acceptable flood control storage operations. Larsen said he and Director Chris Tantau thought about running up to Sacramento to try and get some action on this matter but doesn’t happen without a very long waiting period. Engineer Richard Schafer once told me the average non-military ACE projects takes 20-years at best. However, Larsen did say Department of Water Resources, the US Bureau of Reclamation and ACE all see value in the NASA flights. So, there is some hope. But of

those three government agencies ACE is the most steeped in red tape. Larsen said the best plan, and Tantau agreed, the best plan isn’t to go up to Sacramento and kick the door down. Work with the Lake Kaweah folks and work diligently to provide good, solid science to the Corps. It appears to me getting the flood release procedures updated has been a challenge. KDWCD has much more ability to handle larger flows with spreading basins and such that will allow for more flexibility in releases.

Engineer Dennis Keller reported on Central Valley Project supplies. He said the last rain was warm enough to melt the lower lying snow. Millerton Lake on the San Joaquin River is already at 300,000 a/f of its 500,000 a/f maximum. Some CVP contractors ran a lot of Class I Water last month but some still have 80 percent of their carryover. It’s all going to come down to the temperature.

Larsen reported on Friant Water Authority matters and started by saying Tantau is the new Chairman. Tantau said he appreciates the increase in pay and he will work to bring more water into the area. This was tongue in check if you didn’t know. He doesn’t get paid and of course his job is to bring in as much water as possible. The Temperance Flat Dam efforts continue but some refining of the modeling is needed to get a better picture of the situation. FWA taking over the Friant Kern Canal title is still underway. Some of the cost estimates of this effort are starting to come in and it won’t be cheap. Tantau said it put some folks back on their heals but not enough to stop the investigation. Larsen said the new Cooperative Operating Agreement is beneficial. This agreement is expected to help protect Friant from a call for San Joaquin River water by the Bureau to meet its obligations to the Exchange Contractors. It also provides more state water to the west side growers. Keller reminded folks the first 50,000 a/f of SJR water under Friant contract is no longer available. Even though this new COA has helped there is some hesitancy over this larger amount being unavailable. One bright spot about this is the timing is pretty good to get that debt cleared at a good time. I asked how the state side felt about the new COA. He said there was a good-sized component of the Bureau purchasing Feather River water that made the State Water Project happy enough with the Sacramento Exchange districts to push the deal forward. This is a paraphrase of Keller’s explanation and I don’t feel I did it justice but I can only type so fast.

Keller next spoke about the upcoming Temperance Flat Dam meeting coming up this Friday in Visalia. Currently FWA and Westlands are the only two members of the new JPA – I’m pretty sure I’m correct about this. Keller said Stantec Engineering is concerned if there aren’t enough players on the CVP side to make this project viable there could be room for DWR to step in and make a play. Keller said there may be someone or something willing to pick up some of the initial debt of getting Temp Flat up and running in trade for the ability to recoup the investment by a right to sell the water later. Tantau asked about how SGMA might allow the GSAs to play along. If I understood it may not be feasible due to the evaporative loss. Could there be a smaller Temp Flat project? Don’t know.

Larsen talked about subsidence on the FKC. There were three possible fixes presented. Tantau said since Prop Three didn’t pass the original estimate of $400 million may have to go down to $200 million. However, there is maybe another $100 million in grants that could be applied. How to split the costs between the Friant contractors is also a question. One option is to allow a district wanting larger capacity to get to pay more. Fresno Irrigation District has made it plain it doesn’t want to have to pay for fixing the canal downstream. But the repairs could be billed to O&M. The Bureau would have handled it that way. Keller said the districts he deals with aren’t very supportive of FID’s position, but the support for title transfer of the FKC has cooled somewhat. He also said most of the infrastructure connecting the FKC to the districts are also 70-years old. There are just a lot of questions and Tantau said he looks forward to herding the cats. He has nary a grey hair as of January 8, 2019. Mills observed the best way to herd cats is move the food.

Next the topic turned to the basin construction KDWCD is involved in. There are the Oakes Basin and Paregien Basin Projects. The biggest issue today was terminating the Phase II contract with Agee Construction for the Paregien project. Agee agreed in a very cooperative manner much appreciated by the Kaweah Delta board and staff to cancel out for $2,129. That covered Agee’s cost for the bonding. They waved their other costs and look forward to working with KDWCD again someday. The board approved this of course. Keller also spoke about the Hannah Ranch project. This is a big project and looks to becoming a good asset to the area. A lot of water can be recharged. Larsen said there will be a dam on the project but it will be small enough to stay out of the maw of the State Divisions of Dams or whatever it’s called. That isn’t a pretty place to be these days. Could that have anything to do with Oroville?

Speaking of dams; the Terminus Dam on the Kaweah River had some big problems that are being fixed. I didn’t catch the name of the man who was contracted to fix things but he must be very talented. He was the guy who designed and built the Circus Solei stage in Las Vegas and is now in China doing something or other. He will be back and wrap up the repairs.

There is some problems developing between KDWCD and Tulare County over a stormwater management plan. The county worked up this flood plan without taking full consideration of water rights and when the water becomes flood water as opposed to recharge water on Cottonwood Creek. Everyone seemed surprised the county didn’t consult with Kaweah Delta first. Anyway, Larsen is trying to work this out amiably, as is his style. There will be more in closed session.

but a tremendous amount of data has been and is being collected and water budgets are being finalized. There are three GSAs in the Kaweah Sub Basin: East Kaweah, Mid Kaweah and the Greater Kaweah. The GSPs are being written but as Osterling said the heavy lift comes after the water budget and the following GSP chapters are being prepared. The near-term goal is to compile the data and the projects and run them through the model. Lots of catch up meetings this month. Mills asked if one/third of an acre foot per acre pumping reduction will bring the sub basin into balance. Osterling said there are some pending fine tuning that will change that. It sounded to me the situation isn’t as dire as in many places. The incoming and outgoing flows between sub basins is still a big question – but there is cooperation taking place but folks are holding their cards close. There are also budget overruns. Keller said to send the consultants to East Kaweah GSA where GEI has been taken to task for exceeding the budget. I’m not sure but I think the initial estimate of $100,000 cost overruns for GKGSA has swollen to four times that. While it’s true farmers can be like cats when it’s time to herd them somewhere; they can also be like large, barking German Shepherds when you try to squeeze them. Mills asked if all the previous AB 3030 type Water Management plans have been taken over by SGMA and where KDWCD’s responsibility lies. That might take a little research to figure out.

Larsen reported on legislation saying there was a bill at Sacramento AB 4629 by Joaquin Arambula about designating recharge as a beneficial use. That was shot down but now Friant is looking at getting the USBR’s banking policy updated. This has to do with banking outside the district. Larsen has been following this and he and attorney Aubrey Mauritson are not yet worried about this.

Director Stan Gomes asked if the Trump action on biological opinions was helpful and it was. It got new consultants to replace the swamp creatures who wrote the old biops. And that was that. The meeting went into closed session.