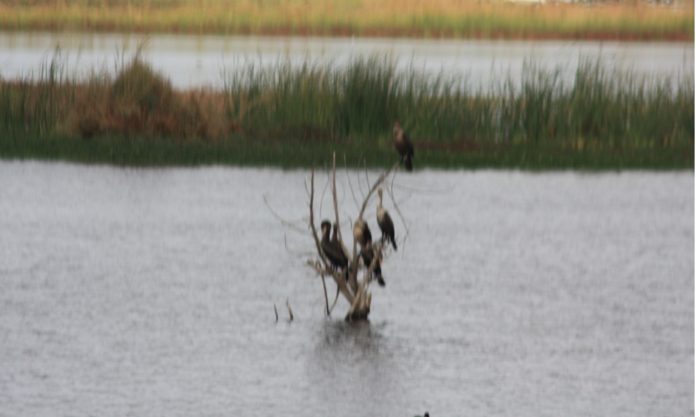 The Kern Groundwater Authority Groundwater Sustainability Area meeting was held on Wednesday, October 25, 2017 at the Kern County Administrative building in downtown Bakersfield. I don’t have any germane comments from this morning’s drive so I’ll list make up something dealing with pet peeves. When I take over I’ll change the Brown Act to require all closed sessions take place at the end of the meeting and no meetings can start before 9:00am in the morning and to take things further there should be seven members of the State Board elected by the citizens of each Regional Board.

Shortly after 8:00 am Chairman and Wheeler Ridge Maricopa Water Storage District Director Dennis Mullins called the meeting to order. There was a quorum and no public comment. The minutes were approved and Patrick Mize, North Kern Water District gave the treasurer’s report. The board approved.

The new Basin Coordinator, Terry Erlewine who also works for Provost & Pritchard reported there is a $3.7 million grant application from Prop One. The package should be ready by the end of the week for review. Letters of support are needed from disadvantaged communities and an ag organization would be ideal in meeting the social buzz word driven process. He reported the attorney is working on the coordination agreement.

Valeri Kincaid is the legal representative for the KGA. She said presenting a coordination agreement as an official document isn’t strictly required but one has been prepared. If I understood her correctly it would be prudent to have some type of coordination agreement for dispute resolution on the different GSPs and it would also be prudent to present this to the DWR whether it is strictly required or not at this time. Director Kevin Pascoe, Arvin Edison WSD asked if there could be more money for the Kern River Sub Basin since it is larger than the other basins. Kincaid said the only situation she’s aware of where the Prop One grant exceeds $1.5 million impacts only the areas recently hit so hard by fires such as the Napa area.

Erlewine next spoke about developing the water accounting framework. He said this is based on the historical records and not a definitive water budget to use for the GSPs. The Water Supply Reconciliation will more fully develop the water budget and that work is being conducted by Todd Groundwater under the supervision of the Kern River GSA. These figures will be run through the coordination committee and presented at next month’s meeting. He also said the costs of hiring P&P, GEI Engineering/Consulting and Kincaid’s legal work is running up costs. There needs to be a cash call for more than $200,000 to keep things going to the end of this year. There will be a draft budget for 2018 to be presented at next month’s meeting. The board agreed to a cash call of $205,000.

The next item also dealt with financial policies and Erlewine said he’s been talking with Eric Averett, GM at Rosedale Rio Bravo WSD and former manager of the KGA, about putting these policies in place. Erlewine proposes billing on a quarterly-bases to help everyone with their budgets and expenses. If this is more money than needed it could be adjusted at the next quarter’s billing. He also wants to authorize contract authority of up to $5,000 for management. The board approved.

Erlewine reported all the consultants for the KGA and the KRGSA have been assembled in the same room to make sure they’re on the same page. He said Dave Halipop (sp?) has been working as the interim planning manager and the KGA is looking for permanent person for this slot. Erlewine also said he participated in a panel last week where several of the Valley’s GSAs got together and compared notes. He and Mark Mulkay of the KRGSA met with folks from Self Help Enterprises and representatives from local schools to discuss SGMA impacts. Next months’ meeting will be Thursday November 16th and December 20th to avoid the holidays. He also said he expects Dave Sappos to be available for facilitation by the first of the year.

Under attorney’s report Kincaid said the agreements have been drafted and sent out to the attorneys in KGA. There was no closed session and the meeting adjourned.

Dr. Daniel Mountjoy will speak on

The Role of Farmland in Managing Ground and Surface Water.