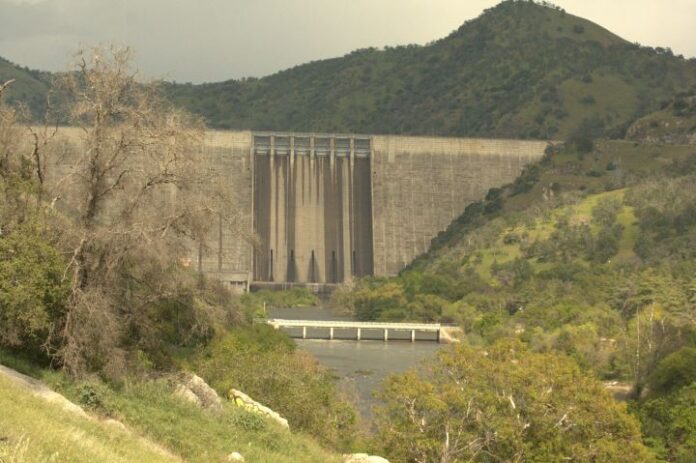 The Kings River Conservation District held its board of directors meeting at its Fresno headquarters on Tuesday, May 10, 2022. I can’t remember the last time I sat in a KRCD meeting. It’s been a couple of years. One thing about the Kings River – there are no salmon in that river. Also, they know how to run a meeting although they don’t laugh at my jokes.

Chairman Paul Stanfield called the meeting at 1:30pm and there were only four of the seven directors present. One of those present, Director Ceil Howe Jr. asked what’s going to happen if he leaves and there’s no quorum. Well, they sped things up and passed approval

of the minutes. Under public comment I asked where Cristel Tufenkjian was. She was on vacation and I thought about just getting up and leaving but decided to tough it out anyway.

Matt Meadows of the Kings River Water Association gave the water report saying there is 636,000 a/f in storage at Pine Flat Reservoir. Runoff peaked back in April and General Manager Dave Merritt asked if this compared to 2013 and I believe it was very close.

KRWA Executive Director Steve Haugen said this year’s snowpack is the result of one storm event back in December and the distribution wasn’t evened out by further snowfall. Things are very patchy. Meadows said the May 1st reading shows 41 percent of average. I also heard Alta Irrigation District is having a run. Fresno ID is starting its run in June and is looking to run two months. It looks like the Kings River will have a 40 percent year if is some more participation occurs.

Next Rick Stone of RHS Consulting said it’s snowing at Donner Pass currently. Stone flies cloud seeding ground seeding over the Kings River watershed. March was very dry and in April there was some weather north of I-80. He said Nevada is as dry as it gets. The forecast for this summer is warmer than average with an unusual center over the Rocky Mountains. The Pacific Northwest is expected to have a lower than usual rain this summer. Stone said this could bring in tropical monsoon moisture up from Baja and send some our way in late summer. Maybe.

Since the meeting began another director joined, Mike Yoshimoto but Howe didn’t leave. Director Chris Kapheim said he attended the recent ACWA conference. He said after attending committees he said it’s pretty clear most folks don’t consider the Voluntary Agreements to be voluntary and DWR was backpedaling on the Governor’s Executive Order.

Yoshimoto also went to ACWA. He said one of the problems he heard about the shape of the forests in California is in many areas clear cutting was stopped 100-years ago and the fire suppression, beetle kills and other impacts where very uniform creating the extra strong conflagration. He said the fires in urban areas are usually worse due to the great amount of fuel. These recent fires had a century of fuel build up and resembled the fire bombing of Tokyo. Yoshimoto said he was told the tree density was also causing more evapotranspiration leaving less water for runoff and ag usage. He said the current president and vice president of ACWA are women and there was a special ladies only reception he couldn’t attend. He said this is the opposite of Afghanistan and he finds that encouraging.

CFO Brian Trevarrow gave his report saying publications in legal notices are 150 percent over budget but they’ve had a good amount of grant money come in. Legal services are also over budget and much of this is fight against High on Speed Rail and whatever it is

those folks are up too. Gas prices are coming close to blowing the travel budget. The FERC costs are being reimbursed by DWR. Next Trevarrow gave the investment report saying there is $22.7 million and the Fresno County rate is running under two percent. He said he’ll be looking at how to get a better rate. Yoshimoto asked about the district’s contribution to the California Farm Water Coalition and wanted to know if this is a voluntary or mandatory cost. It is, voluntary. Merritt said the human resource and personnel evaluation plan are being molded and refined.

Charlotte Gallock has a head cold and as Director of Water Resources she wisely decided to attend remotely and gave her report through a speaker in the ceiling. She said the Executive Order has thrown the GSAs out of whack with the well permitting provision. It was said AB 2201 is up for a vote soon and it will require a 30-day posting of all well permits significantly delaying the process and exposing permittees to harassment.

Gallock said a new GM for the North Fork Kings GSA has been found and is only awaiting approval by the board. She also went to ACWA and she said there was a lot of talk about funding opportunities and she and KRWA will stay on top of this. She also said no one likes the Voluntary Agreements but fortunately it doesn’t have a direct impact on the Kings River.

Merritt said the intent is to start Pine Flat power in June and run through July and maybe longer. He said the upcoming FERC renewal is a big focus and there will be some consultation with Fish & Wildlife.

Merritt said he was at ACWA with Tufenkjian and they got some good ideas. He wants a new website and an annual report. Director Greg Beberian asked about the Kings River Handbook. Haugen said J. Randel McFarland has done a complete top to bottom edit and a complete in-house draft is underway. It will then be distributed to member agencies for input. Merritt said ACWA is coming up with a Quench California campaign.

Merritt said there was a panel of academic attorneys who met to discuss how to update California water law and came up with 11-points being adopted to legislation. SB 1205 will change how water law is dealt with particularly through the lens of so called social justice. Merritt said Deanna Jackson from Tri County WA wants to bring the ACWA leadership to the area to try bringing some awareness of the increasing problem. Merritt said he and Fresno ID GM Bill Stretch are willing to participate in these efforts.

The first resolution proposed was 22-05 and Trevarrow said this is a renewal to ask counties to help with the KRCD voting when an election takes place every two years. The second resolution, 22-06 was about unit four at Pine Flat going through FERC and needing a CEQA exemption. There was no public comment received over this. Both resolutions were passed. No closed session so that was that.

KRCD – In 1951, the State of California took steps to secure its natural resources in the San Joaquin Valley. Through special legislation, the Kings River Conservation District (KRCD) was formed. Today, KRCD is a leading resource management agency for the Kings River region serving agriculture, business and residential communities within 1.2 million acres spanning portions of Fresno, Kings and Tulare counties. The mission of KRCD is to provide flood protection, cooperate with other agencies to achieve a balanced and high quality water supply, provide on-farm support in efficient water conservation practices, and develop power resources for the public good.