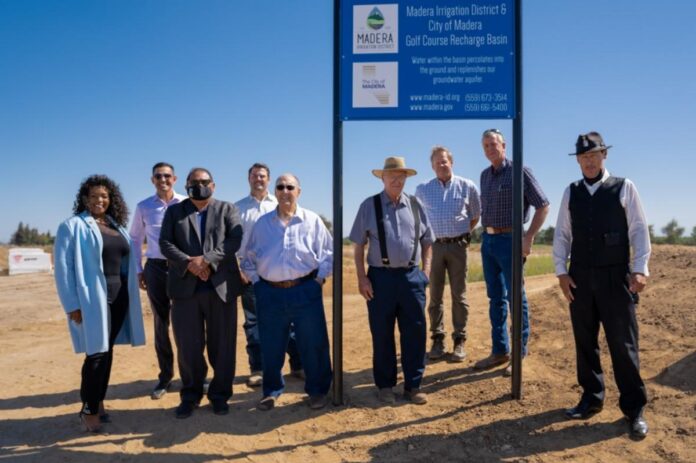 The regular session of the board of directors of the Madera Irrigation District was held May 18 with the major agenda item the setting of rates for water to be delivered this crop year. The meeting was held at the District offices and online and was called to order at 1 p.m. by President Jim Erickson. After roll call showed perfect attendance, the group went into executive session with legal counsel. The agenda showed two items of anticipated litigation and three existing cases along with a real property negotiation and annual performance evaluation of General Manager Thomas “Tommy” Greci.

Coming out at 2:13 p.m. the Board did the pledge of allegiance and said there were no items to report. Public comments were invited but none were forthcoming. The group then convened the GSA board meeting and heard an update from Assistant General Manager Dina Nolan, with work completed on the groundwater recharge basin at the municipal golf course. (See the news release in the sidebar with this report.) There have been meetings

with the city and other GSAs as well. Arrangements have been made for property exchanged with Gravelly Ford ID and the purchase of two parcels for recharge has proceeded.

In her Finance Department report, Controller Jennifer Furstenberg said her department has completed and mailed invoices to Subordinate landowners for 2021 General Assessments. Approximately $265,000 was billed and payments are due June 21, 2021.

The MCWPA (Madera – Chowchilla Water and Power Authority) audit was completed by Bryant L. Jolley, CPA. The auditor will present the 2020 audited financial statements to the MCWPA Board of Directors at its next board meeting.

Henderson & Company Inc., CPAs. (It was presented to the Board later in the meeting.) The Finance team prepared and submitted the annual Special Districts-Local Government Compensation Reports for both MID and MCWPA. Routine bookkeeping and payroll are ongoing.

There were no board questions or comments, so on to the Engineering, Operations and Maintenance report from Charles Contreras, department manager. His six-page report with color photos in the board agenda noted plenty of work to finish the recharge basin at the golf course. Dina Nolan added that Contreras and his workers had done a very nice job on this work. There was a long list of other projects in the field and in the shop, including continuing work on the Madera Canal. He reported on the well run average depth to groundwater, too, with a chart that showed a depth of 206.57 feet last fall and 195.05 this spring.

General Manager Greci reported that MID is working with a community cleanup of the Fresno River bed running through Madera in cooperation with the city and county. Encampments of homeless folks are a continuing challenge and eyesore as well.

He then moved to the “$64 question,” water quantity. He said there are still a large number of unknowns and additional bad news about the availability or lack of availability of Delta water. He said some good news is that there might be slightly increased water supplies

from Friant. He said the initial allocation number of 20% seems solid. He concluded, “The staff recommendation today is we move forward assuming 20% allocation of class 1 supply.” He added, there may be an additional 15,000 AF from Hensley, so in total that’s four to five weeks of water. Staff will continue to look for subordinate water, but those numbers aren’t looking good.

Regarding price, it was noted that the same methods of calculations were used last year when the allocation was 65% priced at $110 / AF. Using the same formula as earlier years, but with less water to sell, the result to cover expenses has to be a higher price to achieve a break even budget.

The following rates were set with consensus discussion and the full schedule was approved on a motion passed unanimously as follows:

Construction water – not being offered this year

District conveyance – lands within the district – $70 / AF plus 15% losses

In terms of when deliveries would start, after discussion it was agreed the gates would open starting June 21 and the hope is supplies will last into early August. Orders are being accepted effectively immediately.

At 3 pm. Kip Hudson presented the audit report for his CPA firm, a 34-page document. Hudson led the board through the report saying there were no significant changes in the Board’s financial position. He said COVID was the only challenge since the work could not be done on site. He said a $730,000 adjustment of legal fees and a $400,000 prior period adjustment was made putting the expenses in a different time period. He said there were

no disagreements with management. He did recommend more attention to obtaining multiple bids on all major expenditures, but it was noted that staff had already implemented a more consistent procedure. He concluded his presentation in about 10 minutes, and with no questions from the board members the report was accepted unanimously.

Director Brian Davis was nominated to continue as a member of the Association of California Water Agencies Board of Directors representing Region 6. Director Dave Loquaci thanked him for serving, and approval was unanimous. Davis said there is a lot going on with the Association, with many regulations and ongoing issues to deal with.

The Board set June 15 and 18 at 2 p.m. for public meeting dates as the board of equalization to hear concerns about valuations, assessments and related matters.

Director Carl Janzen thanked Controller Furstenburg for “living” through the audit and getting it done. She complimented the Hudson, Henderson firm but said it would have been easier if they had been able to be on site.

The final agenda item was the District directors’ reports.

Rick Cosyns – On Apr. 8 he sat in on a seminar about groundwater recharge.

Brian Davis – The canals look nice and clean with the equipment looking good. He thinks things are in great shape.

Carl Janzen – On Monday and Tuesday last week he attended the ACWA annual meeting on Zoom. Liability, workers comp and medical insurance costs are staying pretty constant but property insurance going up, caused by climate change with fires, tornados, hurricanes worldwide. Even hail storms are more severe causing more damage. He said the fall conference will be held in person on Nov. 29 – Dec 2 in Pasadena.

Dave Loquaci – He’s attended various meetings on SGMA and said he hasn’t seen much action in some of the other GSAs. He said the Madera board of supervisors feel the urgency because they can see the water table dropping like a rock. At some point, he said, they will have to stop considering options, grants and wording of resolutions and will have to start doing something.

Editor’s note: Earlier that same day, the Supervisors meeting as the Board of the Madera

GSAs – the white areas – had discussed and listened to feedback on the draft proposals to establish farm units and specific allocations. They tabled action until their regular June 8 meeting.

Director Janzen added that the subbasin water table will be dropping… it takes five years or 10% of class 2 water to replace the 100,000 AF that is lost in the drought.

Jim Erickson – He’s been going to Friant Executive Board meetings trying to get the Kern Canal fix in place and trying to protect Friant water. They’re working hard, he said.

At 3:25 p.m. the Board went back into closed session to conduct the annual performance evaluation of General Manager Greci.

News release issued by MID and City of Madera

Groundwater is vital for the community of Madera, particularly in dry years such as 2021.  When surface water is limited due to inadequate rainfall and snowpack, Madera is even more heavily reliant on groundwater.  To help ensure groundwater sustainability for Madera both now and into the future, projects and programs must be developed and completed.  The planned groundwater projects and programs for Madera Irrigation District (MID) and the City of Madera (City) are outlined in the Madera Subbasin Joint Groundwater

Through partnering efforts, MID and the City are pleased to announce a cooperative groundwater recharge project has recently been constructed at the Madera Municipal Golf Course.  This project, which entails a connection between MID’s facilities and the water hazard located between Holes #5, #6, and #7, is a result of collaborative efforts between MID and the City.  The project not only will allow for groundwater recharge in the water hazard but will also provide recreational benefits to golfers when the basin is filled.

“MID is excited that this project, which has long been discussed, has come to fruition.  It is a win-win-win for the City, MID, and the entire Madera community.  We look forward to a year when surface water supplies are sufficient to utilize this new facility” stated Dave Loquaci, MID Board Member.

“The City is proud to partner with MID for this project.  Directly advancing the goals of the City and MID by optimizing our groundwater sustainability efforts remains a key priority.  We are excited about the direct benefits this project will bring to our community” stated Santos Garcia, Mayor, City of Madera.