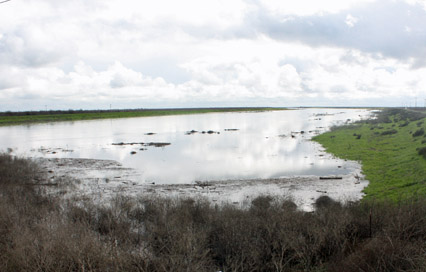 The North Kings GSA board met on Thursday, May 24, 2018 at the Fresno Irrigation District headquarters in Fresno. Chairman Jerry Prieto called the meeting to order at 6:00 pm. The room went silent as we stood in reverence and saluted the flag in chorus. That was nice. There was no conflicts of interest and the minutes were approved. Executive Officer Gary Serrato had FID engineer Adam Claes reported on the current snowpack in the Sierra. Millerton lake has 455,000 a/f of storage and on the Kings River there is 884,000 a/f in storage at Pine Flat Lake. FID has 138,000 a/f in storage. Claes said traditionally the Kings River runoff peaks in June, but it peaked a little early in May this year.

Claes continued with the GSP timeline and the goal is to have all the GSAs in the sub basin to have their GSPs finished mid-summer 2019 in preparation for the 2020 deadline. Next Ron Samuelian Provost & Pritchard spoke on the coordination agreement between the seven GSAs in the King Sub Basin. He said a MOA for dispute resolution and grant funding has been drafted and adopted by three GSAs with the other four expected to follow suit. He said the grant funding contract will be entered in agreement between the North Fork Kings GSA and DWR. A formal data sharing agreement between the GSAs is on its way and three coordination tasks have been identified: confined aquifer boundary flows, data management system and a water budget. So far the work has been focused on storage changes. The methodology was culled down to five versions. If I understood correctly alternative four is the favorite. In any case all the GSAs recognize the numbers will change. Not all GSAs have bought in yet but he believed it is heading that direction. Director Buddy Mendes said he believes Samuelian is correct. Serrato said NKGSA and East Kings GSA have announced they like the number four alternative. Prieto welcomed Michael Carbajal, City of Fresno’s new representative.

Luke Serpa, Clovis City Manager chairs the Advisory Committee and he announced Dwight Miller retired and Brandy Swisher has filled the position of Outreach Subcommittee Chair. He also said Serrato showed up at the Advisory Committee meeting in a Hawaiian shirt to remind everyone he is retiring and the advisory committee wants to know how the board wants to find a replacement. Qualified XOs for SGMA is a small pool to start with. Attorney Bryan Martin advised if the board wanted to put together an ad hoc it wouldn’t take an action. So, Prieto nominated himself and Director Jose Flores for the ad hoc. They will work with Serpa on this project.

Bill Stretch chairs the Technical Sub Committee saying the internal GSP deadline is January 2019. He said Provost & Pritchard is part of the planning team. Four of the seven GSP sections have been completed. Stretch said these are the easy parts. The water budget must be completed sub basin wide but also on the GSA level. Sustainable management criteria, projects and actions and plan implementation need to be completed also. Serrato said what is being looked at is part of what is required. But putting recharge next to the waste water treatment plant wouldn’t be a wise move.

Stretch said at least two well per township are required for monitoring. That will be 40 or so wells throughout the GSA boundaries. Stretch said FID has been monitoring wells since it was formed in the 1920s. Developing a sustainability criterion has to be decided. That means the measurable, verifiable groundwater levels throughout the period of mitigation ending in 2040.

Lisa Koehn chairs the Administration/Fiscal Subcommittee. The committee went over the budget earlier this month and determined the assessments for the coming year would be $400,000 and that doesn’t include the new XO.

Serrato thanked Director Rudy Hernandez Biola Community Services District for loaning his GM Dwight Miller. Swisher gave her report as new chair of the Outreach Subcommittee. She said the immediate projects are a newsletter and utility bill insert. The translation of text on the website to foreign languages is in the works. She showed the board a list of outreach meetings held. They are staying on it. There is also a Facebook page, god help us.

Next the always charming Amanda Monaco from the Leadership Council of Justice & Accountability asked the board to provide a letter of support for community engagement activities. She said her group works with disadvantaged communities throughout the state. These include communities in the NKGSA. Her group has received grant funding from DWR but DWR requires any GSA preparing a GSP write a letter of support. Her group’s goal is helping to translate and see that disadvantaged communities’ concerns are included in the GSP. Prieto asked her how her group will coordinate with Self Help and work within the adopted NKGSA Public Outreach Plan. Monaco said they are already working with Self Help and

she will look over the Outreach Plan and work with it. Prieto was concerned of Monaco’s group not stray from the Outreach Plan. Serrato told her NKGSA has painfully taken great effort to reach out to disadvantaged communities and those communities have been working together. Self Help has been on board since day one and has worked with FID before. He wants to be sure Self Help, Community Water Center and her Leadership Council all present the same message. Florez asked who actually does the work. Monaco said herself and staff members. Water quality was listed on Monaco’s presentation and that isn’t covered directly by SGMA. Serrato told her there are four water disadvantaged communities in the NKGSA and they have all been contacted and engaged. Martin said a letter of support from NKGSA should include that it is already conducting outreach in accordance with SGMA and Serrato wanted it understood in the letter the Leadership Council will coordinate all work with Self Help and other groups. The board voted to table the matter until such a letter can be written.

Martin then addressed the MOA for dispute resolution and grant sharing between the seven GSAs in the Sub Basin. Serrato said Paula Landis and Bill Luce to be the mediators agreed to by everyone. This doesn’t prevent any GSA from suing but the dispute has to go through the mediation process first. Also, if you don’t sign you don’t get a taste of grant money. Got to sign to get the money. The board approved. Four down and three to go. Mendes said this will be pivotal as the GSP coordination develops.

Serrato’s report was next and he said there are more 218 elections and he’s hopeful they will pass. He met with the State Board’s Sam Bolin-Brien and he’s coming to address the coordinating committee in June. Serrato also spoke with the Building Industry Association at a panel. He said the BIA had a lot of questions and there are lot more questions needing answers. The half of his time he runs FID as GM.

The directors where given a chance to speak up. Mendes said the North Fork Kings GSA set the 218 at $10. He is concerned there will be harmful legislation as a reaction to folks dissatisfied with SGMA.