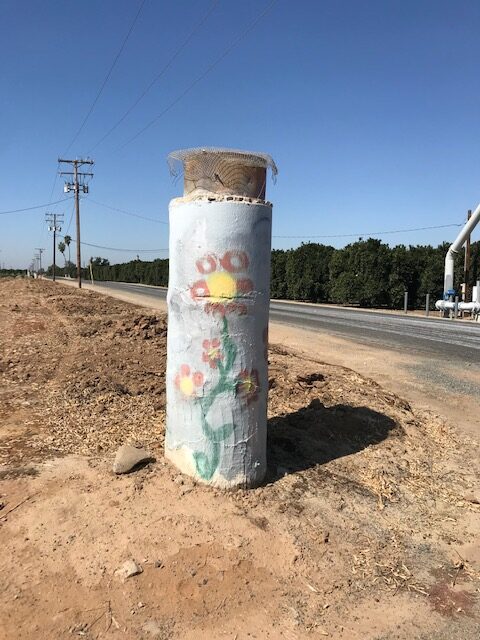 Photo Credit: Because our readers want to know about this photo. Photographer – Me, Don Wright, I took the photo. Just so you know the subject of this photo is not located in the North Kings GSA area. Was the stand pipe vandalized or is it “found art” created with the permission of the property owner? I don’t know, I thought it was good to see something besides gang sign and vulgarities. If you like it, it’s somewhere in Tulare County. Write me and I’ll tell you where. If you don’t like it then the pipe is just here in the Valley.

The North Kings GSA board of directors met Thursday, May 27, 2021 by GoToMeeting. Executive Director Kassy Chauhan took roll and explained the rules at 6:00pm. Chairman Jerry Prieto asked Chauhan to contact one of the directors who hasn’t been attending meetings and it turned out he was present but wasn’t able to get his audio to work. For some reason the chat function has been shut down by the administrator. Many of us have issues now and then with the audio visual gadgets on our computers. The chat feature can be helpful. Also the participants feature helps a little bit with understanding who is speaking. Respectively suggested.

The agenda was approved as were the minutes. Each vote is taken by roll call, so things don’t go as fast as if a voice vote but the state in its wisdom likes a slow meeting.

Next Mr. Samuelian was asked to speak but wasn’t available so his son Ron Samuelian, Provost & Pritchard filled in with an update on matters within the Kings Subbasin. A $4.8 million draft came through with two projects within the NKGSA receiving funds. Samuelian, Chauhan and everyone else who knows the competition of grant awards. Some projects lost by half a point. He stressed the need to have the projects ready for submission.

Samuelian said the data to complete the Spring 2021water contours has become available and the map is almost ready. There are some parts of the GSA that indicates a positive increase in groundwater depth and there are some areas that are still a data dessert. One thing for sure a year like this will require more pumping. The wet and dry swings have

outnumbered the average years for the past six years. NKGSA represents about 30 percent of the Kings Subbasin land area. However, there has been an estimated net increase of 90,000 a/f. That number will go down this year.

will be very dry year. He presented a chart showing DWR’s estimate that we are at zero percent of average snowpack for this time of the year. Yesterday the federal Central Valley Project allocations for ag contractors, except the Friant Division, have been reduced to zero. The municipal and industrial allocations have been cut from a dry year 50 percent to 25 percent. That will have impacts on the Valley’s westside and even into the Bay Area.

Claes showed a chart of the driest years on the Kings River going back almost a century and 2021 is shaping up to be the third driest in history. There is no indication there will be any relief beyond some thunderstorms in the mountains but those like they will be on the weak side.

Advisory Committee Chairman Scott Redelfs has a son graduating from school this evening and Claes gave his report saying the advisory committee spoke about much of the same things being discussed at this meeting. You can read the NKGSA Advisory Committee report here on the WaterWrights website: https://waterwrights.net/2021/05/14/north-kings-gsa-advisory-committee-may-14-2021/ (too much of a shameless plug?) He said other things as well about the financial reviews from the advisory committee.

Chauhan reported the workgroups are meeting and it may not be until later this summer before the groundwater impact mitigation policy will be ready to submit to the board. The reporting policy will most likely be rolled into this effort as well.

Today was the deadline for project submittals. In order to be eligible for state grant funds a project has to be included in a Groundwater Sustainability Plan. There will be a workgroup meeting tomorrow to further review the project proposals.

FID’s controller Deann Hailey usually gives the financial reports but she was also unavailable this evening. Lisa Kohn gave the report and it was approved. Kohn also walked the board through the proposed budget. There is an estimated $35,000 needed to pay for coordination and facilitation of the subbasin. There will be a $50,000 annual increase to the legal reserve. That was also discussed in detail at the advisory committee. There were some questions about small increases and decreases of member costs but that was due to rounding. That seemed to satisfy the curious. If I understood the overall expenses are about the same, the allocation of funds are changing as SGMA matures and the process takes on more implementation.

Prieto asked if the current budget is holding and Chauhan said some technical assistance costs are going to rise. With that the board approved the budget. Chauhan also said interested party invoices will be credited to the following year as it isn’t know how much of these voluntary donations will come in year to year. Prieto thanked the donors.

Chauhan gave her report saying much of her report was covered by Samuelian. The Kings Subbasin Annual Report for the water year 2020 and the GSP took into account there are dry years. One of the focuses is developing a complete and accurate monitoring network.

She said there was a meeting of the May 25th member agency mitigation responsibility. This is the amount of overdraft each entity is responsible for and will have to mitigate. Chauhan said this is a tool to aim at a target. The input data is very important. There are concerns about boundary flows, underground flows from one GSA to another, banking and recharge credits from one GSA to another and other matters.

She also spoke about outreach. The Kings Subbasin is joining together to make folks aware it is implementing project and not just writing new rules. NKGSA is participating in the San Joaquin Valley Collaborative Action Plan that is taking place under the guidance of Stanford University. Also Sarge Green and others at Fresno State University are working on a drought preparedness program for the California Partnership for the San Joaquin Valley. Chauhan said CPSJV has been very active in addressing problems and she thought they would be a good fit for drought preparedness efforts.

The Kings River Conservation District has been working with NKGSA to update and improve its social media and web presence. Individual agencies will be asked to contribute their stories. Prieto suggested the Next Door social media might be a good avenue for getting the story out.

Drilling a new well is expensive. NKGSA is putting together a representative monitoring network using existing wells. But there needs to be access agreements and well construction data to go along with the down well video inspections. She asked everyone to refer landowner questions to her if they like. Miscellaneous items she reported on include well permitting reviews to help with preparing for potential impacts on groundwater and

the response efforts for the critically dry conditions. One thing everyone involved with SGMA agrees on – it would have been nice to have had a few good years to work out the procedures and policies before a drought.

Chauhan also told the board UC Davis came up with a map of wells expected to go dry based on its analysis. There have been some questions about the methodology and the maps are getting some media play. Be aware. There have also been some successful efforts within the NKGSA. For instance the Biola Community Service District has a recharge project that will help it become sustainable. Good for them. FID also has some new recharge basins awaiting water.

Directors’ reports were next on the agenda. It was short as no one had anything to say. So

the meeting went into closed session for one potential case of anticipated litigation. The agenda wasn’t clear on who was going to sue who for what but it’s out there, waiting. With that the open portion of the meeting ended at 7:16pm.