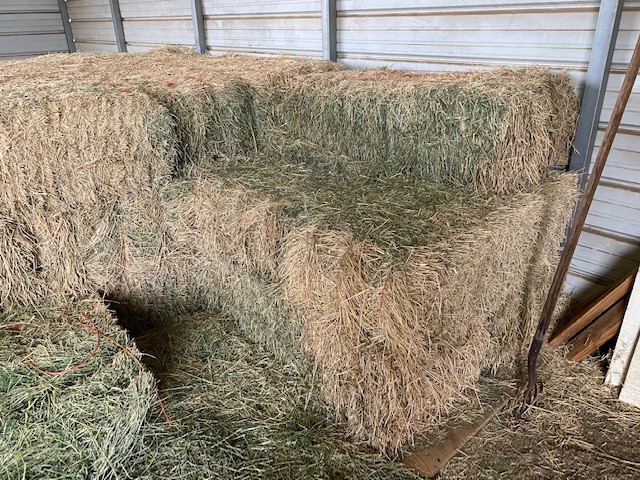 Publisher’s note: We often hear how growing certain crops is a waste of water. There are calls from the enviro and other “communities” to do away with current farming practices. A major Southern California daily newspaper even ran an editorial advocating the state government dictate where certain crops can be grown. The plan was to save water by only allowing almonds to be grown in the Sacramento Valley. I’ve been told by farmers it

actually takes more water to grow the same number of almonds further north of the San Joaquin Valley. One also has to ask how well it turned out for Georgia and Ukraine when the USSR tried that.

Of course there was a presidential candidate from New York City!!! who made the famous remark about farming. Remember? “I could teach anybody, even people in this room, no offense intended, to be a farmer,” Michael Bloomberg said. “It’s a process. You dig a hole, you put a seed in, you put dirt on top, add water, up comes the corn.”

Alfalfa is a favorite whipping boy for the anti-agriculture crowd. Hay is too low value, it uses too much water. It is discouraging to hear the constant drum beat from nonfarmers about how, when and where to conduct agribusiness and farming. Take heart, there are those speaking out with informed voices against the incorrect assumptions put forth from folks who evidently don’t care about our food supply. And alfalfa is a primary contributor to that supply. The following is a press release from the Family Farm Alliance and the California Farm Water Coalition.

With drought conditions continuing to blanket the Western U.S., and farmers struggling to find adequate water supplies, competing interests are pressuring the federal government to cut the water supply farmers are using to grow our food, including alfalfa, which is a foundational food chain crop.

In response, the Family Farm Alliance and California Farm Water Coalition have produced a White Paper titled, “Our Food Supply at Risk; The Importance of Alfalfa Production in the American West,” detailing the valuable role alfalfa plays as a principal feed source for the nation’s livestock and diary industries, its environmental benefits, and contribution to effective drought management.

“You’ve got to . . . keep listening to the farmers, because ultimately, you don’t want to get to the point of creating a food crisis to solve a water crisis.”

Family Farm Alliance Executive Director, Dan Keppen, said reducing the acreage devoted to alfalfa may seem like an easy fix to save water, but a decision to do so has bigger ramifications for our nation’s food supply.

“Alfalfa is grown as livestock feed for the beef and dairy industries, both of which contribute to a balanced diet, including high protein foods, such as beef, milk, and milk products, such as yogurt, butter, cheese, ice cream, and cottage cheese,” said Keppen. “At a time when consumers are facing record inflation and sticker shock every time they to go to the grocery store, it makes no sense to aggravate the problem and drive prices even higher by cutting out a vital component of our food supply.”

Mike Wade, executive director of the California Farm Water Coalition, said that Arizona and California lead the nation in per-acre production of alfalfa.

“With crop yields that are double the per-acre yields in most other states, the ability to make-up lost production from Arizona and California is very unlikely, which would lead to shortages, higher feed costs for producers, and the loss of more family farms when so many are already struggling,” he said.

The report outlines many of the additional benefits that come from alfalfa production, including enhanced soil health because of deep rooting and the nitrogen alfalfa naturally adds to the soil during its growth cycle. This reduces the amount of chemical fertilizers that have to be used to grow crops that follow alfalfa during crop rotation.

Alfalfa also contributes to the health of pollinators, such as bees, when it grows because of the crop’s prolific flower production. Bees use alfalfa for honey production, more of which comes from alfalfa farms than any other source in the U.S.

And alfalfa is an efficient water user, producing a crop year-round in warmer climates, but is also able to survive droughts as well as intentional “dry down” to make water available for other so-called high-value crops, including fruits, nuts, and vegetables, that face drought-driven water shortages.

The California Farm Water Coalition is a non-profit, educational organization that provides fact-based information on farm water issues to the public.

The Family Farm Alliance is a powerful advocate before the government for family farmers, ranchers, irrigation districts, and allied industries in 17 Western states to ensure the availability of reliable, affordable irrigation water needed to produce the world’s food, fiber, and fuel.

More notes from the publisher: This white paper is well worth your time to read. It’s only 14-pages, four of the  pages are charts and a handy reference; and amply illustrates the very current and real threat to ag in the Western United States due to the Colorado River situation. Recounted in the report is water managers from Las Vegas, Nevada criticized alfalfa as a water waster before hearings in Washington DC. What is it with that town? There is an estimated 2.2 million people in Southern Nevada. Moses led millions into the desert also but they had a cloud by day and pillar of fire by night to guide them. Las Vegas has fountains shooting water hundreds of feet into the searing desert air.

Another fact brought out in this white paper – it may take a gallon of water to grow an almond but it takes 10-gallons to make a computer chip. How many of these critics are willing to do without a cell phone to save water? How do without butter, cheese, yogurt, milk, hamburgers or a good steak? Alfalfa is not a monster plant, some kind of giant, carnivorous flytrap grown by Morticia Adams. It’s foundational to our food and economic wellbeing.

Time to get off the defense and start swinging back with some common sense based on reality. This paper does that. Spoiler alert – the last paragraph of the paper sums it all up.  “IID [Imperial Irrigation District] General Manager Enrique Martinez said it best in a recent interview with the Desert Sun, ‘You’ve got to . . . keep listening to the farmers,

because ultimately, you don’t want to get to the point of creating a food crisis to solve a water crisis.’”