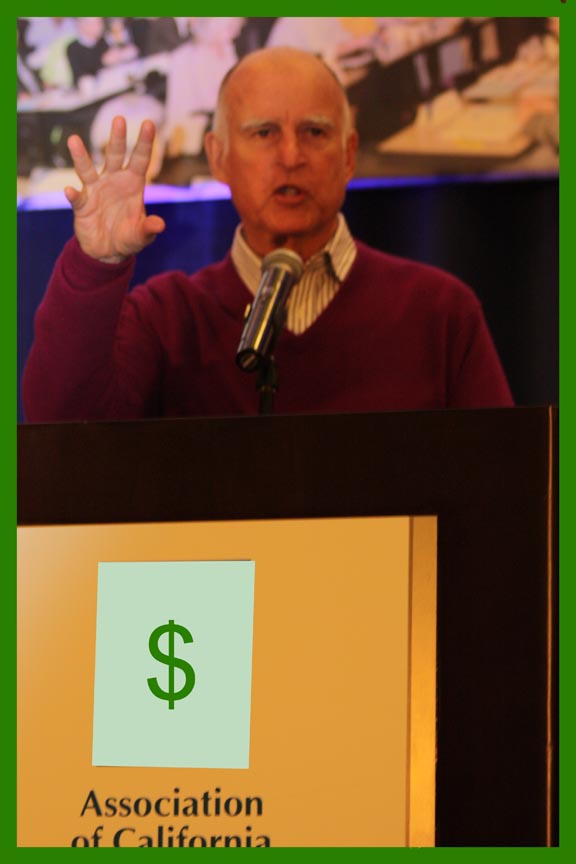 The Santa Clara Valley Water District held its board of directors meeting on Wednesday, January 23, 2018 at its San Jose headquarters. The SCVWD is a big district and encompasses both agriculture and the Silicon Valley as well as Stanford University. The district receives surface water from three sources (maybe more I’m not sure) the Central Valley Project, the State Water Project – both through San Luis Reservoir and – don’t judge them too harshly but they even get some water from Hetch Hetchy. Anyway, this is a district with a lot on its plate. The closed session started at 4:00 pm and they had some employee negotiations.

The open session began at 6:00 pm with Board Chair Richard Santos leading us in the flag salute. Something must have went well during closed session or something because he was really in a great mood. How great you ask? Well, the City of Sunnyvale showed up to give the district a plaque for helping with their clean water education. The lady representing Sunnyvale was invited to sit in his seat and have her photo taken with the board surrounding her. But that wasn’t all; there is a gad fly from Morgan Hill that attends most of the meetings and comments. He was ushered up to the dais and had his photo taken with the board as well.

The board then debated opening a public hearing to consider increasing its monetary compensation. Director Barbara Keegan wanted to table this until later. Director Tony Estremera wanted to raise the per meeting saying he goes to many more committees and other meetings than when he first started. Estremera moved for a five percent raise. Director Nai Hsueh seconded the motion. Directors Gary Kremen and John Valera said they were in support since they only make about $100 per month and spend 20 to 40 hours a week at their duties. It passed and now they make about $105 per month. Good for them.

Santos gave the State of District address. It was a good speech and if I can get him to send a copy I’ll post it to the website. It ranged from praising the staff and his fellow board members to challenging them to work with ethics, dignity and cooperation. He said he wants to keep graffiti off of the district’s property and ensure water supplies. He had a list of successes, he had a list of challenges and I noticed he called for a retreat for the board and staff. That worked well for Friant and Santos was rewarded with applause.

Next, Rachael Gibson, Manager Government Relations gave the board an update on what has been accomplished in legislation and outreach. There was a team of lobbyists from Washington DC and Sacramento. They talked about the Army Corps of Engineers’ support of the Coyote Creek flood control project. Julie Minerva from Carpi & Clay received praise for the work of her firm with the federal agencies. Mark Kadesh of Mark Kadesh & Associates works with congress. Kadesh thanked the board for the members traveling to Washington to meet with elected officials. He said it goes a long way to helping garner support. Monica Miller from Sacramento Advocates, LLC gave an update on state matters. She said, and I’m sure I heard her say this, Governor Jerry Brown is conservative fiscally. Nonetheless Ms. Miller did have an impressive list of accomplishments on the state level. She said there are 2,500 bills a year to evaluate and they will. Estremera thanked the lobbyists for their help in getting help for last year’s flooding.

Kremen thanked Miller and SCVWD’s wheel hoss Garth Hall for their excellent work on Pacheco Reservoir. The Pacheco Reservoir expansion is one of the 11 projects before the California Water Commission for a part of the $3 billion in Prop One funds. Water leaves the Delta and ends up in San Luis Reservoir. From there it either continues down stream or it is pumped up hill to the Pacheco Reservoir for use by SCVWD and San Benito County Water District. This holds 7,000 a/f I believe. After the project is completed the reservoir will hold between 130,000 to 140,000 a/f. What this means for the San Joaquin Valley is more room in San Luis Reservoir. Right now SLR has a 200,000 a/f dead pool it can’t draw down past due poor water quality harming the San Felipe Division of the CVP: i.e. SBCWD and SCVWD. If the San Felipe Division had this extra storage it could free up the 200,000 a/f for releases from SLR.

TAP International provide risk assessment and the district is interested in hiring. Denise Callahan went through a lengthy explanation about what an audit of risk assessment would entail. She must of done a good job because the board voted to retaining TAP.

The next item concerned an agreement with Brown & Caldwell to provide consultant services for the Countywide Water Reuse Master Plan. That will cost $1.9 million. I could not understand a word the young man addressing the board had to say. He has very nice Spanish accent, but it is really thick and he spoke at a 100 miles a minute. I guess the board and staff was familiar enough with the project or maybe they could understand the speaker. Keegan commented the water reuse master plan has to be incorporated into the regular old water master plan. Director Hsueh also commented saying the district needs it.

SCVWD has a dam it’s responsible known as Anderson Dam. This dam sits on the San Andres fault. An earthquake of 7.2 could cause liquification and failure. The retrofit will cause the operations to go sideways if they aren’t careful. A spokesman said there won’t be a water supply for two of the five years of estimated construction. Kremen wanted to know how much water will be lost. Staff explained how they will go about an analysis but Kremen wasn’t ready to sign off without knowing how the supplies will be maintained. A guy speaking on behalf of the project pulled out some Stochastic Modeling graphs* that showed a manageable way to keep supplies flowing. Now the cost has raised almost $100 million in the past couple of years. It’s kind of a rock and hard place or perhaps a rock and a liquefaction place. The board voted to go ahead as it did on the Almaden Valley Pipeline inspection and rehabilitation project.

Rick Calendar, Chief of External Affairs gave the recommended positions on federal legislation and other matters, some state and SGMA stuff. Next was the fiscal stuff and Darin Taylor, Manager of Fiscal Stuff gave a beautiful 30 second report that was approved.

The last gasps of the meeting included a chance for board members to report on things and I missed what Varela said because I was yacking to the gal sitting next to me, but Santos thanked him for whatever it was. While I was writing that I missed what Hsueh and Estremera said. Kremen said to expect some changes at San Luis Delta Mendota. I believe I mentioned in other reports former SLDM CEO Jason Peltier has resigned. Also, Kremen is SCVWD’s main man on the Pacheco Reservoir expansion project. Keegan said the district needs to develop partnerships with the local leaders. Director Linda LeZotte said she had a good meeting with some folks in San Francisco who took out their lawns and replaced them with landscaping that requires less water. Santos reported he went to a butt load of meetings. He said he appreciated everyone’s help. The very last thing is to have the clerk of the board review and clarify requests. Probably a good idea. With that the meeting adjourned.

The next regular board meeting will be at 1:00 pm on February 13th.

*I had to look this one up and according to Wikipedia “Stochastic gradient descent (often shortened to SGD), also known as incremental gradient descent, is a stochastic approximation of the gradient descent optimization and iterative method for minimizing an objective function that is written as a sum of differentiable functions.”