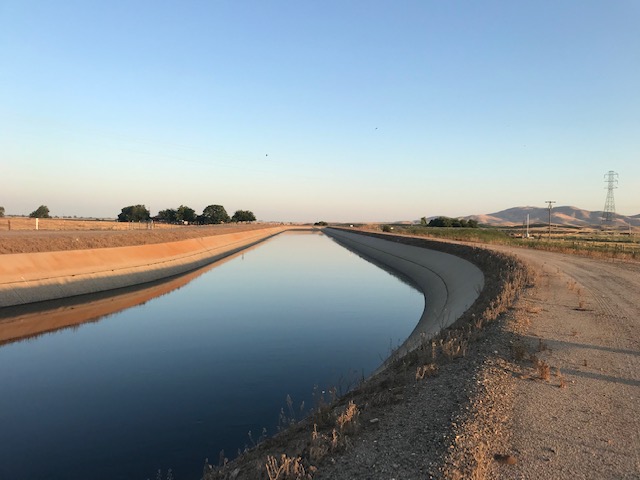 The South Valley Water Association met remotely on Monday, September 21, 2020 by Zoom. Chairman Joe Ferrara called the meeting at 8:00am and SVWA Executive Director Dan Vink said SVWA has followed the budget and said the saving was in travel expenses. He said preparing the 2021 budget will be a new experience as the 2020 year was a mess.

The Bureau has a 65 percent allocation and that should stay on track. Delano Earlimart Irrigation District General Manager Eric Quinley said the Creek Fire caused the Southern California Edison folks to set the flows from their dams to a minimum, lock the doors and evacuate. That could cause a very low flow situation into Millerton Lake that could possibly hinder flows to the Friant Kern Canal. There is also a question of a much higher siltation

from runoff in the denuded portions of the fire but Quinley said Millerton Lake is long and much of the sediment settling could take place well before it reaches Friant Dam. At almost 280,000 acres burned the Creek Fire has impacted a sizable portion of the San Joaquin River watershed.

Temperance Flat appears to be in mothball. Vink asked Limas who said two of the South Valley participants have been given reimbursements. Limas said until the Bureau picks the project up again there probably won’t be much action on that process. Vink asked if there is a threat of leaving this open, is there a scenario that could harm things? Limas said the study showed good environmental benefits. Attorney Alex Peltzer said the feasibility study done by the Temperance Flat Group is private and the USBR feasibility study is a different document. Peltzer said there are some remarks on the private document that wouldn’t be good to air beyond the internal draft stage.

Next Peltzer spoke on the Collaborative Adaptive Management Team CAMT and Collaborative Science Adaptive Management Program CSAMP happenings. He said CAMT is the hard science part and CSAMP is the policy part. Water users, fisheries and government agencies have been meeting together. They meet every now and then and Peltzer said there is a policy dispute brewing wherein the water users are trying to get the direction to include the new biops and other environmental issues. The State of California and NGOs have been suing over the federal biops and they want to return to the bad old days where the decisions were made in part by dates on the calendar as opposed to the real time management the new biops call for. There is supposed to be a holistic approach that includes as many of the factors impacting the ecology of the Delta. Predation isn’t being considered for example. The always excellent Fishbio will be presenting to one of the C’s before the end of the year, its studies on predation. I subscribe to Fishbio’s newsletter and find the information they present to be considered. I saw in one of my news feeds one of the environmental groups posing as a fishing alliance just released a editorial calling for

more power be given to the State Board and it be allowed to decree all water allocations in California. This was in the name of efficiency, certainly not in the name of the constitution or 10 Commandments. I didn’t see them mention the State Board is appointed by the governor. If the logic fallows, why not just dictatorial powers over water directly to the governor? One the other hand Fishbio has taken a look at the entire Delta; habitat, species, flows – not just flows as so many others have shortsightedly pursued. Come to find out about 90 percent of out migrating juvenile salmon are eaten by non-native predators such as stripped bass. It seems like that should be taken into account when determining Delta management.

But there are forces opposed to further Delta exports even it means operating the Delta in a manner that harms the environment. These forces would rather the Delta continue to decline than see ag get more water. So it seems.

Listener Geoff Vanden Heuvel asked about a Delta smelt fish hatchery and Peltzer said this is one of the more positive developments. Peltzer said there is some push back on this from some who wants only a natural increase in fish populations. Evidently even if it means the lose of species. About this time Washington DC lobbyist Garret Durst and Sacramento lobbyist Louie Brown joined the call.

Brown started by saying the legislature adjourned on August 31st. He said SB559 made it out of the senate to help the author, State Senator Melissa Hurtado. The Assembly appropriations committee chaired by Lorena Gonzalez held the bill and stripped it off funding. Gonzalez is the same one who brought us AB5 that hurt employment opportunities throughout the state. The bill did get through a process where the need for Friant Kern Canal repairs was acknowledged and it now sits on Governor Gavin Newsom’s desk. If Newsom doesn’t veto it the bill will have the state study the situation to see if there is a way for it to contribute up to 35 percent of the costs to repair the Friant Kern Canal. This comes to a head on September 30th which is the deadline for signing or vetoing bills. Brown said there was a lot of talk about a resources bond that turned into a resources/COVID bond that has $50 million for FKC. That didn’t happen but it may well come to pass next year. Brown predicted some money from some state source next year for water that will maybe include some FKC ducats.

Durst was next and Vink asked him what kind of money could come from the feds for the FKC. Vink asked   Durst said only the House got any work finished on FKC and is working with the Senate. Right now they are concerned with a continuing resolution to keep the government going until the first part of December. At some point in December there should be $71 million for the canal but that’s a slim chance. There is $25 million for capacity correction that should stay in the budget and it’s likely the Bureau can spend this on the FKC and perhaps the Delta Mendota Canal. There is also $200 million emergency spending fund the Republican Senate will most likely insist to be included but it will most likely not because it is a negotiating tool. It sounded like anywhere from a portion of $25 million to the $70 million. Brown commented this funding amount will have a direct impact on how much money becomes available in SB559.

Vink asked what a change in the presidential administration could mean to South Valley and others. Durst said broadly speaking there would be a genuine effort for the state and the feds come together on the biops. On the funding side the WIIN Act has been the piggy bank for canal repairs. The WIIN Act is set to expire at the end of this year but if a project has a completed study it can remain eligible for that WIIN Act fund. As an example in administration change Durst explained there would be no WIIN Act money for raising Shasta Dam appropriated under a Harrison/Biden Administration, but FKC funds might just get through the federal cash seine.

Vink asked Quinley to address the FKC funding at the local level. Quinley said there is a backstop plan as all of the southern contractors believe the need for canal repair is great. There is a plan where the contractors south of the FKC kink are being asked to raise $70 million. (I think he said $70 million.) Quinley said there are the do nothing plan, the return to design capacity plan and repairs plus increased capacity plan. Whatever the shortfall is the southern contractors will be asked to help make up the difference based on economic benefits received. This approach has transitioned from the Southern Districts paying as backstop to the idea a loan from the Southern District would be more palatable. It’s a lot to ask growers to pay to fix a problem they didn’t cause. There are some Friant districts against all Friant contractors paying for canal repairs. The district who hold this position are all upstream of the kink. The Friant Water Authority has looked at the canal having three zones of capacity that follow the three plans just laid out. Shafter Wasco ID GM Dana Munn asked if Friant is shifting to the Southern Districts’ contributions be in the form of a loan due to push back from southern districts. Quinley said he wasn’t sure as much of those discussion are in closed session. Quinley did say when there are that many occupied spaces left of the decimal point there will be a good deal of negotiation.

Ferrara asked about a group of white land landowners* who have commissioned a study that shows much of the cause of subsidence has been from the west. As I recall this study pulled data from Thomas Harder’s initial study of the Tule River Sub Basin and found causal connections to the Tule Lake Sub Basin. Some remarked this study was like the Russians saying according to their study there was no Russian interference in voting.

There was talk about third parties purchasing capacity and Quinley said if you’re upstream of that entity’s turnout there shouldn’t be a concern where the money comes from. However when the Friant Division was first built the districts’ founders bound together. The Southern Districts are worried about outside buyers getting a hold on northern districts and posing a threat to capacity. I believe some of this is based on what financing sources are wanting to buy in to capacity. Vink said there are big investment companies buying or trying to buy as large blocks of land as they can and hold a good deal of property in the southern end of the Valley. Vink said this brings a good deal of concern to the smaller farms and he believes they need to band together and keep Friant water controlled by Friant.

There have been requests from FWA for funding of the Airborne Snow Observatory. Vink said SVWA is supportive of the program. He said he’s working with the ASO staff to help find funding so they don’t have to turn over the couch cushions every year looking for change. Peltzer recommended SVWA making the response to the Friant letter verbal. He said that is all the assurance necessary at this point.

Vink said the Westlands Water District filing on the San Joaquin River hasn’t had any action worth noting. He said the meeting was ready for closed session. Ferrara asked for public comment and there wasn’t anything of note. So, that was that.

ALL RIGHTS RESERVED.  Copyright 2020 by WaterWright.net/DAW