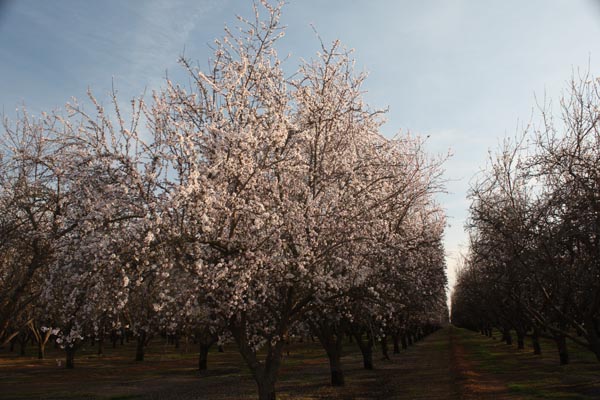 The Tulare Irrigation District’s board of directors met on Tuesday, April 11, 2017 at its headquarters west of the City of Tulare. Before the meeting one of the local growers was talking with staff about   a nearby ditch company that’s practicing organic ditch tending. It’s letting the weeds grow. Chairman David Bixler called the meeting to order about 9:00am and the breakfast burritos were delicious. Beware the hot sauce; we’re not talking something as tame as tobacco. The minutes were approved and the operations and management reports were next.

Superintendent Wayne Fox talked about non-organic ditch maintenance. Evidently the heavy rains have caused mattresses to sprout throughout the district’s canal system. Fox reported staff has been busy between maintenance and some deliveries. Engineer Aaron Fukuda said one of the recharge basins has hit a slow down due to a big slug of turbid water in the early part of the season. There are instances where the top of the canal was lower than the top of the basin (I believe Fox was referring to the Swall Basin) and that defeats the benefits of gravity flow at a certain level. The district brought out pumps and ran them off of tractor PTOs.  That’s power take offs for those of you whose biggest tractor is a riding mower. By the way, the O&M report has been upgraded in the looks department. Fox and Fukuda added some visual sizzle that did not go unnoticed.

Next Fox told the board he’s found two used Ford F150 pickups. This opened the eternal debate between Ford and Chevy. I asked if they’d considered Dodge and was told that would take board action. General Manager Paul Hendrix said one of the, I think, maintenance mechanics named Gill or something used to say, “I’d rather push a Chevy than drive a Ford.” I got to laughing and I don’t know what the board decided.

Fox told the board they need a new ditch tender who also can handle the herbicide control and there is a temp worker already working who could step in and fill the void. TID usually keeps two temps working and hires them for full time when positions open up. TID has about 20 full time employees and Hendrix said there used to be 30 or so but the newer labor laws have made that prohibitively expensive. Fox pointed out this isn’t an increase in the size of the crew. A new hire would just bring the crew back to size. Director Rick Borges wanted to review the benefits policy for health and retirement. Kathi Artis, Controller said, if I understood, the district could bring the candidate to the position while the review takes place without locking itself into an outdated compensation package it doesn’t want. Someone said staff can get five days off for marriage during a water run but only three days off for a divorce.

Water Master Marco Crenshaw gave this water operations report. He said things have changed with the US Bureau of Reclamation. The Friant Division thought it would get 100 percent then a 50 percent Class II but with uncontrolled season estimated to keep running until mid-June it might be a 10 percent Class II. I believe the most expensive water is Class I, but it is also water with a more secure delivery as well as the only class that can be carried over to the following year. Most of the time a district saves its Class I for later in the season. TID gets surface water from the Friant Division of the federal Central Valley Project and the Kaweah River. Crenshaw said releases at Terminus Dam have been more gradual than expected with a slower runoff. He said the district is on line for an historic high of Kaweah water. This year’s snow pack is big but the higher elevations are much better than the lower. This is might be why the runoff is going the way it is.

The next item was the depth to groundwater report Crenshaw said the measurements only go back a month so far so the increases have been modest but he expects those figures to go up. Still they are measuring increases throughout the district.

Hendrix lead the board in a look at water sales for this summer. He said the district is in compliance with Prop 218 and may charge as much as $55 per a/f. He said the object is for averages to make the district a little extra during wet years and ride out the dry years. This year so far all the water has been from the Kaweah River, but there is some cheaper Friant water waiting in the wings. If TID sells an a/f of water for $40 to $45 this summer it can clear $1 million to help pull out of the deficit from the drought years. Director Dave Martin said going as low as possible since the farmers have also been impacted by the drought. The board approved staying at $10 per a/f through the end of this month and the summer rate at $43 per a/f. There very well could be another rate for winter deliveries decided later this year.

Artis gave her report and said the district has sold 400 copies of Richard Zack’s meticulously researched, lovingly written and much anticipated “Quest for Water” the history of Tulare Irrigation District. The board approved Artis’ report and paid its bills.

Fukuda gave his reports and said there is an Irrigation Turnout Tester. It was built at Cal Poly San Luis Obispo and sucks water out of a canal into a customer pond. This is compared to the turnout measurements to calibrate if the district’s turnouts are in compliance. He showed photos of it on its trailer. A little lighting, maybe some fringe and it could double as a parade float. Seven turnouts were tested based on customer complaints various types of turnouts. Come to find out the district is measuring less water than it was delivering. The range was 1.2 percent to 11.4 percent. This proves the district is in compliance and the complainers were happy to find out there are not being overcharged. This testing is offered by Cal Poly’s Irrigation Technology Research Center and limited to federal contractors and I think the districts with a history of working with the ITRC are probably at the top of the list.

Hendrix next reported on the Mid Kaweah GSA saying the boundary disputes on the east side are on the same page concerning overlap. The MKGSA is meeting later today in Tulare at City Council Chambers in the library. It now appears the entire sub basin is covered and covered in time to meet deadlines. Coordination between the Mid Kaweah, the Greater Kaweah GSA and the East Kaweah GSA is important. All three GSAs are now sitting down and it looks like they are all ready to work with GEI Consulting on the cooperation.

Fukuda said the economy has improved somewhat and there is an increase in housing development. A piece of property about to be developed has three or four feet of TID pipeline running through a bunch of backyards. The district is willing to quit claim a part of the pipeline and it will not be liable for the fence and such running parallel to the pipe. Hendrix said the issue with the city as to liability for development above the pipeline such as sidewalks and landscaping has never been definitively settled. Fukuda said the district’s understanding is if there is a need for repairs TID will dig it up, fix it and put some other dirt back. This is a 48” pipe and there are other utilities that have found their way into TID’s easement. Fukuda said this won’t be the last time there is such a quandary. The board approved the quit claim.

The board approved Resolution No. 17-07 – support for ACWA policy on Bay Delta Flow requirements. That also brought up a consensus of discontent regarding Governor Jerry Brown’s gas tax increase, but that’s a long, sore subject.

Board member reports were next and Borges reported he went to the Greater Kaweah GSA stakeholder meeting and evidently there was a very long discussion regarding riparian pumping. He said 20 growers attended the Kaweah Basin Water Quality Association meeting and all of them supported self-certification of a sediment control plan. I didn’t fully understand but somehow the State Board has offered to regulate cattle grazing. Grazers can now join Irrigation Lands Program coalitions without anyone ever asking coalitions. We wondered if the state wants to count cow patties. The bureaucratic system being what it is; keep your eye out for the position of Assistant Bovine Circular Waste Inspector III. The coalitions are already under a great deal of stress just trying to preserve members’ privacy. Borges reported Friant Water Authority sent a letter of support for the bill approving money for the Friant Canal pump back facility. Also, if you use an email connected to a district there is little to no hope of this being confidential. Another big portion of the meeting deals with the subsidence on the Friant Kern Canal.

The meeting then went into closed session for four items. The next meeting is May 9th.