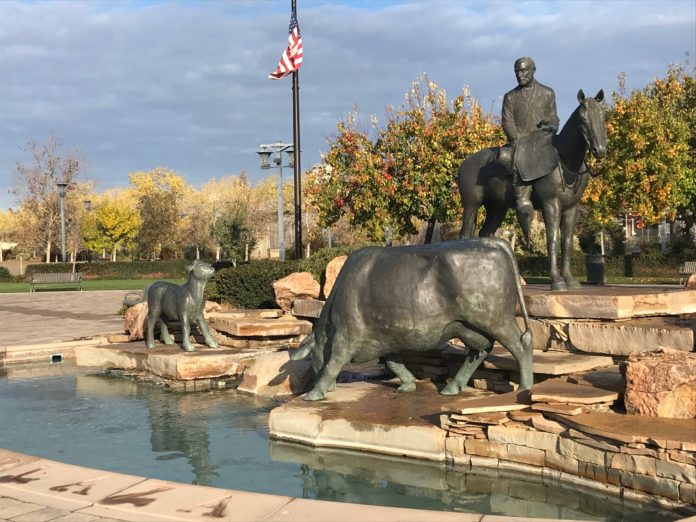 The Exchange Contractors board of directors met on Friday, February 5, 2021 remotely on GoToMeetings. Chairman James O’Banion had Executive Director Chris White take roll at 9:00am and the meeting began. At exactly 9:01am a semi hauling crushed road fill pulled up in my front yard. Naturally I was happy to have some material to fill the potholes and puddles in my driveway but I had to deal with this. My brother had swung a deal through his engineering firm and I forgot he told me the load was due this morning. So that’s why I missed the first part of the meeting. But I’ve been going to Ex Con board meetings for 20 years so let me guess – there was a quorum. They saluted the flag, approved the minutes, paid the bills and approved the financial report. I came back just when the water report was starting.

Water Master Adam Hoffman gave the water report saying the Delta has been receiving more than 18,287 cfs and combined export pumping is 3,231 cfs. This leaves a little over 15,000 cfs flowing out to sea. Hoffman said most of the first part of the storm was cold and fell as snow. The second part of the storms came in warmer and more rain is causing inflow to show now. But least things get too good in the Delta there is salt coming in from San Francisco Bay and muddy water from the rivers both of which can cause reduced pumping. Most of the Sierra Nevada received snow and in some places up to 10 feet. The Sierra has: North 69 percent, Central 74 percent and South 57 percent of normal. All of this is a great improvement from the pre-storm averages.

White said the San Joaquin River Restoration Program is trying to get the US Bureau of Reclamation and impacted parties to come together and decide how the Mendota Pool will be included in those plans. He’s expecting DWR to put out its first forecast this Monday and run that through a model to help find out what to expect this year.

Under SGMA White asked Jarrod Martin, General Manager of Central California Irrigation District to give the report. Martin said the annual report is coming up quick and hydrologist Ken Schmidt has been working on an analysis of the data provided by the four Ex Con entities. Schmidt should have a report for next month’s board meeting. Looking forward to that. I’ve always thought Dr. Schmidt could have had a very successful career in stand up

comedy. He’s certainly one of the wittiest men I’ve met in the world of water. He’s always been generous with his knowledge and willing to take time to explain things to me.

The Los Banos Reservoir released some water into the Delta Mendota Canal yesterday and there will be a further report on the Del Puerto Dam project later in the meeting.

Ex Con Policy Director Steve Chedester gave his report saying they’re still waiting on the Bureau to give its estimate on the seepage damage costs caused by the San Joaquin River Restoration efforts creating flows. Due to CEQA issues they’re pushing the Bureau to get it wrapped up by next month. The Mendota Pool fisheries comments are being addressed.

The Bureau gave the OK for the fish screen and the next step is the fish capture design. Chedester said coordination between the engineers and the Bureau has improved. Good to hear. There is still enough money in the tiller at this time to reach the end of the year but not enough to finish the project to completion. A construction schedule hasn’t been finalized yet.

Chedester said the Mowry Bridge construction is ongoing. The Bureau added 3,500 acres to the seepage area and I don’t think they’ve revealed why yet. Not much of anything happening with the Temperance Flat project. Some of the unspent money could go back to the California Water Commission Prop One awards. Not unlike the Oscar awards.

White reported a draft agreement with Rosedale Rio Bravo Water Storage District for banking. Water stored there could remain if Ex Con enters into a long term agreement and that will be discussed further in closed session.

Next the Water Resources Plan report was given and White said on January 19th the Department of Interior notified Congress the Del Puerto Dam project is feasible. Engineer Andy Neal spoke saying this falls under the WIIN Act, allows for more funding and this is a real milestone. The feds have found the project to be technically and financially feasible.

Neal said one of the government agencies believe there are some Golden Eagle nests in the area and that will have to be taken into account and a permit is needed. Also a permit for drilling in the creek bed and flood plain. A dam architect, also known as an engineer needs to come on board to complete the design. Road work, utility pole relocation and other considerations all have to be sorted through the mix.

White said funding and cost estimates are being developed by Neal and his team. Some preliminary work shows each partner may have to kick in about $1.8 million each to keep this project rolling for another year. He said he’s not asking for that money right now. Neal added the Bureau has been involved in the EIS.

Consultant Dave Cory reported on the mess coming from Sacramento saying the Regional Board sent out notices to the Central Valley requiring everyone with a waste discharge permit warning them to get their salt plan in order. Cory said there is a 10-year plan in place that will cost about 10 cents per acre for the next decade.

Most of the nitrate focus is on the South and East sides of the Valley where the high priority areas are. Cory said that will be the test area and the Ex Con area can learn from them before they have to go through the same thing. The Regional Board has come up with the Soil & Water Assessment Tool – SWAT. SWAT is a model for tracking nitrates and it might be helpful.

Lobbyist reports were next and on the state side there was some talk about the Governor Gavin Newsom recall efforts. I had hopes for him but. . . White said the legislative committee will meet soon and receive an update. He said the water bills in Sacramento are relatively light so far. The Voluntary Agreements are still having an impact of some kind.

On the federal side things are stupider than usual in Washington DC. New administration appointments are being made of course but Biden’s swath of executive orders have but the biological opinions back on the table. That’s disturbing. White said Congressman David Valadao has been appointed to the appropriations committee.

Attorney Andy McClure reported Friant litigation court of claims had competing motions. Friant wanted consultant Dan Steiner for deposition and the judge allowed provided the questions are about facts and don’t stray into his expert witness testimony, if I understood.

The Del Puerto Dam case now has compiled all the plaintiffs into one case, again if I understood correctly. McClure said they are trying to get the venue in Merced County. There is a petition before the California Supreme Court to move it to Stanislaus County but

this isn’t expected to be heard. DWR shares the same opinion as Ex Con – DWR wants to review the plans before there is a trial.

Martin said CCID has wrapped up much of its canal maintenance. He said there were flows from the westside streams and they were able to divert successfully and there wasn’t any flooding. Demands are starting to tick up.

Jeff Bryant, GM Firebaugh Canal Water District reported the new Grasslands Basin Authority is now fully staffed and up and running. He said they’re working with the Bureau to get some grant money. He said the Panoche Silver Creek flooded and spilled into some of the district’s canal. The New Horizon Pistachio plant was hit and the canals have a great deal of hulls floating around. What a mess bless their hearts. Demands are also going up.

Randy Houk, GM Columbia Canal Company said he expects to start deliveries on the 15th this month. He said they were able to test out their drain pumps last week thanks to the rain, and they worked.

John Wiersma, GM San Luis Canal Company reported average demands are starting up. He said they’ve been working a lot with the Bureau on the SJR Restoration. He said the SLCC system will be fully functional by next week or so.

Under information White said a letter to PG&E has gone out about the contractual obligations it has to Ex Con. He said there are two firms being interviewed next week to take a look at the proposed new 20,000 square feet building that will hold a museum on

the ground floor and combined Ex Con and San Luis Delta Mendota Water Authority offices. The proposed site is just across the street in downtown Los Banos and the city is excited about this. How refreshing to have government on one’s side for a change.

White said there will be a congressional fly-in organized by SLDM’s J. Scott Petersen. Ex Con will participate in this event. It’s like a webinar instead of a trip to DC to meet with elected representatives and bureaucrats. The meeting then went into closed session at 10:08am. This could very well be a short meeting record for Ex Con.