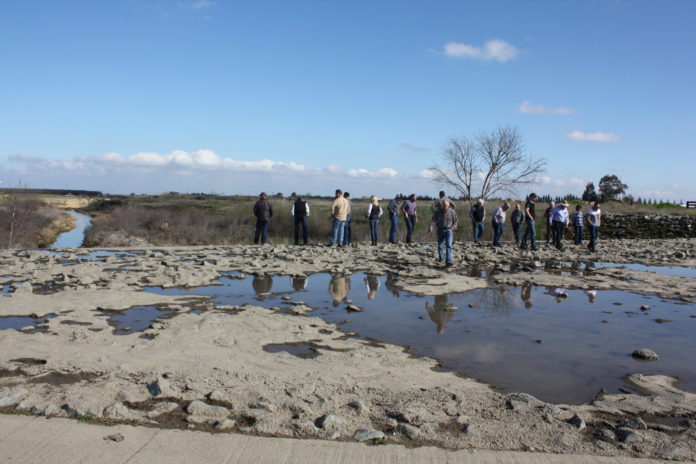 The Exchange Contractors board of directors met at its headquarters in Los Banos on Friday, July 12, 2019. I had other distractions earlier in the morning and wasn’t able to arrive until 10:00 am. The Ex Con GSA was scheduled to begin at 8:30am with the regular board meeting at 9:00am. Chairman Jim O’Banion was present so I’m guessing things started off with the pledge of allegiance and introductions as usual. Adam Hoffman gave the water report and it turns out the low point on San Luis Reservoir will be 800,000 a/f in August – this was not received as good water management. When I arrived Executive Director Chris White was giving his report.

White said Valley Water – formerly known as the artist formerly known the Santa Clara Valley Water District – is interested in conducting water transfers with Ex Con on favorable terms; five to four exchange rate, maybe 5,000 a/f. Yesterday after the San Luis Delta Mendota Water Agency meeting there was a tour of San Luis Reservoir and the Pacheco Reservoir. There is a $1.6 billion plan to raise the BF Sick Dam on SLR adding 120,000 a/f of storage and adding seismic safety. The Valley Water and San Benito County Water Agency are teaming up with the Pacheco Pass Water District for repurposing the Pacheco Reservoir. This entails increasing the storage from 4,000 a/f to 140,000 a/f by installing a new 300 feet high dam slightly upstream from the current dam and spill way that are getting pretty flimsy. There is a gravity fed pipeline from SLR to fill the reservoir and it can be engineered for reverse flow giving a great deal of flexibility to the supplies in storage.

Next White presented the board with an overview of the agreement between Ex Con and the Del Puerto Water District’s Del Puerto Creek Reservoir project to set up a JPA. The agreement is structured as an agreement between two water districts as advised by actual attorneys. Getting the initial plans together is a priority and only then will the folks interested in being

partners be considered. Attorney Paul Minasian said there is a danger of Ex Con and Del Puerto WD getting deadlocked since there are only two JPA members, but that isn’t expected at all. A young man from Del Puerto WD gave an update on work already done on the reservoir site. He said the was the potential of a kit fox corridor but after weeks of surveying that threat has been deemed as a very low possibility. A 275 -350 cfs draw off the Delta Mendota Canal is planned and being looked at. The property acquisition was fairly low drama. There is congressional support building for this to be a locally run project. Austin Ewell was retained for help in Washington DC.

Attorney/consultant Dave Cory reported the State Board listened to the Regional Board’s CV Salts workshop. He said the State Board and listen to the basin plan and accept or reject it, sending it back to the Regional Board for changes. He said the enviros have their panties on fire because the basin plan allows for local control and the e’s want a solid plan that cleans up the entire Valley all at once. Cory said the enviro and social justice warriors want ag to be continually out of compliance. Cory said he’s cautiously optimistic the plan will be adopted. He said the enviro justices are also opposed to ag receiving any taxpayer dollars to clean up groundwater. Evidently it’s ok for them to receive millions of tax dollars for their agenda but let’s not share money nor water. He said there is the whole Irritated Lands Program’s approach to nitrates and much heavy lifting to be done in this area.

Under legislative reports white said June was dominated by SB 1 on the state side. There has been no amendments to make this piece of political theater palatable. Even Valley Water home to Google and Apple think this bill is wrong. It’s just an anti-Trump law that interferes with efforts to get help in the Delta. On the federal side there was a bill naming Del Puerta Canyon for $1 million for a feasibility study. Both White and Del Puerto WD General Manager Anthea Hansen had the opportunity to testify in Washington DC on behalf of the project.

Minasian said he’d like to see in closed session a discussion about some drainage bad news. The briefs on the Friant lawsuit – I believe over the allocation of San Joaquin River water from Friant to Ex Con during the recent drought – are now available for viewing. He said he doesn’t believe the lawsuit will have legs. The San Joaquin River restoration has created the need for a letter for the four entities to sign to help cover their butts in the event of a design flaw complaint. The unimpaired flow suit is taking place in Sacramento and he doesn’t think Ex Con needs to get involved in that one. Minasian said the PG&E bankruptcy has some implications for Firebaugh Canal Water District. You can have a well but if there is no power it does you no good. Firebaugh asked about a solar field and Minasian said it isn’t good for a public entity to go solar when it only pumps part of the year and has no way to utilize or sell the power the rest of the time. PG&E’s fees are expected to go up, no duh. He suggested hiring a power consultant. FCWD GM Jeff Bryant said his district spends $500k a year on power.           John Wiersma, GM San Luis Canal Company said his district has saved a good deal by going solar, about 80 percent. Minasian said this needs to have a serious look as it has long-term implications. Bryant has been speaking with consultant Lon House.

The Four Entities reports were next and Columbia Canal Company GM Randy Houk said June demands were down this year and moss has hit things. Wiersma said SLCC is also experiencing lower demands. He said the work on Sac Dam has been paying off in better supplies. Bryant said FCWD was also delivering less than normal last month. He’s getting frustrated with some of the drainage challenges taking place. It’s not easy getting new entities formed and up and running. Jarrett Martin, GM Central California ID said his district is getting hyacinth in the canals and it’s all hands on deck trying to eradicate that nasty weed. Not as nasty as yellow star thistle but ugly nonetheless.

Under information White said there are several events and deadlines for the rest of the month. One notable is in August the Ag Leadership Tour will come through Ex Con. In September Columbia is buying lunch. The meeting will be held there.