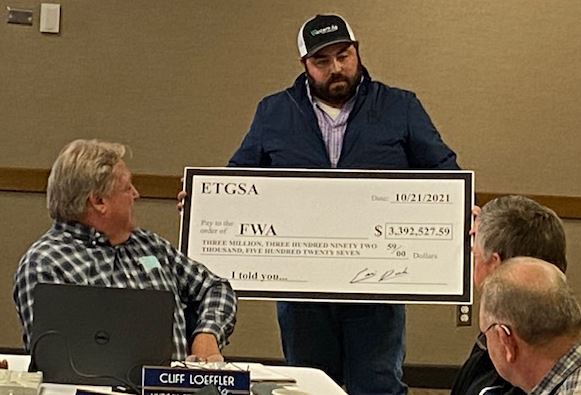 The Friant Water Authority held its Thursday, October 28, 2021, board of directors meeting at the Visalia Convention Center. The closed session began at 8:30am and the open at 10:30am. The only announcement to come out of closed session was CEO Jason Phillips still has his job. Chairman Cliff Loeffler led the group in a prayer of thanks for the recent rain. And under public comment Director Matt Leider presented Loeffler with a check for almost $3.4 million. Leider is also a director on the Eastern Tule Groundwater

Sustainability Agency. ETGSA is ground zero for the subsidence causing harm to the Friant Kern Canal and has agreed to pay a share of the repairs. It was a testimony to God blessing us with rain – something that makes farmers happy. No one wants to write a check for $3 million but Leider and the other members of the ETGSA did so with a good attitude. I think I’ve been attending these meetings long enough to know this wouldn’t have been as positive an experience if we were still bone dry with fires in the hills.

Johnny Amaral reported GSI, the firm doing the environmental work for FWA on

monitoring subsidence along the Friant Kern Canal, needed a change order to further open up the budget to get rolling in 2022. The money had already been budgeted but the change order was necessary to release it.

Wilson Orvis reported the San Luis Delta Mendota Water Authority had some money left over and had to give it back. How the money is to be allocated back to Friant contractors is kind of a new challenge. Orvis reported he’s given the managers a heads up on this matter. Mike Hagman GM Lindmore Irrigation District has a great deal of experience in working through CVP financial matters. He said he’s sorry SLDM has lost employees who understand the allocation process but he doesn’t believe the agreement between Friant and SLDM is being honored. Director Kent Stephens asked if the check should be returned until this matter is resolved. He said SLDM is using different methodology for invoicing than for reimbursement. There is a chance Friant could get less than the $300,000 plus being offered but the board was concerned about setting a precedent harmful to Friant’s interest. Staff was directed to bring this back after working with SLDM.

Amaral told the board there will be a meeting next week between Friant, the contractors and the US Bureau of Reclamation at the Lindsey headquarters to discuss the construction portion of the FKC repairs.

Ian Buck Macleod reported there was an all-time record high for rainfall in the Sacramento area during this last storm. Inflow to Folsom Reservoir was very good. Shasta and Oroville (Oroville raised 10 feet in 24-hours) both have benefited from the storm as has reservoirs and snowpack further south. MacLeod said history shows a better than average chance for normal to a little better than normal water-year following wet Octobers.

The 20 percent Friant allocation made it through the water year. Millerton Lake is above average for October and not just from the recent storm. There is carryover still in storage. The Bureau will allow 10 percent of Class I carryover. It wasn’t clear to me if the demand is there at this point in time. No one wants to lose this supply.

Amaral gave another report on external affairs. He said Friant is working with members to stay up to date on financing options. He said the More Water Now ballot initiative could be a source for funding repairs on infrastructure. He said it is an interesting approach. More Water Now will set aside two percent of the state’s general fund and spend it on water projects until five million new acre feet is realized.

On the federal side all the attention is on the infrastructure bill. President Joe Biden was on the Hill earlier today lobbying before leaving for Scotland to the G20 Climate Summit. Moving around in Washington DC has become difficult due to the Big C virus and has impeded meetings. A couple of engineers in the room offered to act out Biden’s visit to congress but were politely turned down.

Republicans have also opposed turning the clock back 20-years on the science. No matter who was in the Oval Office an update of the biological opinions needed to take place. The biops are supposed to be updated regularly but nothing happened under the Obama Administration and the time to allow pumping was based on the calendar. The new biops are based on actual conditions such as Delta inflow and where the fish are.

Austin Ewell reported Biden left for Scotland without getting an agreement on the almost $2 trillion bill. About a fourth of that money is slated to go to climate change.

Is there any wonder why we’re in a mess? The government wants us to wear masks and get shots but it doesn’t want to acknowledge the difference between males and females. If my doctor didn’t know if I was a man or a woman I wouldn’t trust him or her. Same with my government. If it wants to leave $85 billion of arms to our enemy and retain a general who agreed to call our enemies and clue them in what our military is up to – then don’t ask me to give you more money for climate change. Our government’s science, spending and priorities are way off. Just to be clear the proceeding paragraph was my opinion, not something Ewell said. But it should be an opinion shared by anyone who’s read the Constitution, Atlas Shrugged and 1984.

Ewell also reported on the San Joaquin Valley Water Blueprint saying there is an effort to get a board installed and formalized. This should be completed by the beginning of the new year. There is a Collaborative Action Plan coming together under the guidance of Tim Quinn, former head of ACWA and Metropolitan Water District. The CAP is a group of diverse interests meeting and discussing how to find the common ground on water in the Valley. There is also a drinking water program involving Fresno State University, Self Help Enterprises and Friant amongst others. Ag alone will not solve our water problems.

Director Eric Borba said there are some barriers being erected to moving water around that will hurt recharge efforts. He said get the water in the ground and then worry about transfers and such. Phillips said some of the NGOs are opposed to water trading for some reason known to themselves  but certainly not obvious to me.

Superintendent Chris Hickernell gave his report and Phillips said he just wants to hear about the goats eating weeds along the canal. Hickernell said the goats remain popular. And why not? If you’ve ever had goats they can be fun. And if you’ve ever had goats you also know they can be unfun too. Like the sound of church bells and freight trains goats are often best at a distance. However, there have been many positive comments and few news stories. In other news Hickernell said an office for Orvis had to be prepared at the

headquarters. Can’t get off the goat subject. One disappeared in Strathmore but it was rescued before the taco feed took place. They really are working out well. Hickernell said the goats have learned how to gauge their own progress and are pretty much drama free.

Orvis gave the regular SLDM report saying raising Sisk Dam on San Luis Reservoir is moving forward with discussions on how to pay for it taking place.

Phillips said he participated at the Madera County Harvest Celebration in Chowchilla I think. He said there was a nice memorial presentation for Madera ID Director Rick Cosyns who recently passed away.

There will be a board retreat next month. Friant traditionally doesn’t meet in November because it always falls on Thanksgiving. Last year another tradition was started with a retreat to give folks a chance to catch a breath and do some strategy works. Also, Phillips’ daughter will be playing in a high school volleyball championship this evening. He said she’s graduating this year and was in the seventh grade when he started working at Friant.

The meeting then adjourned.