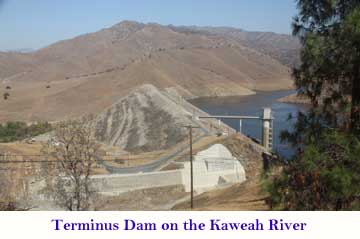 General Manager Mark Larsen spoke about the fees KDWCD charges the Kaweah St. Johns River Association for management. The annual fee proposed was $273. This is slightly lower than last year. Mills said the KSJRA are a whinny bunch (the much of the Kaweah Delta board sits on the KSJRA board) and Director Chris Tantau remarked this is the only cost going down.

Victor Hernandez gave the water report and said this is the last water report for this year. He said we’re one month into a possible La Nina. The current defining conditions must remain in place for three months before the official word is La Nina. Larsen said the US Bureau of Reclamation has announced a 100 percent Class I for KDWCD.

Engineer Dennis Keller said this is confusing and he’s never seen such a large bit into next year’s supplies. He said the bulk of the

Class I has yet to be delivered. He said moving carryover to next year might be a better way to manage the storage for farmers because the Bureau isn’t doing so. The San Joaquin River is being operated for restoration instead of the supplies it was intended to provide under the Central Valley Project. There’s also the subsidence restriction on the Friant Kern Canal that impacts the southern Friant contractors but leaves more recharge opportunities for the northern districts.

Larsen said the Friant Water Authority has joined the San Joaquin Valley Infrastructure Authority JPA. He said it will cost FWA $50,000 in fees in 2017. Larsen said the SJVIA has been so focused on promotion that Friant’s contribution of management is much needed. Tantau said Friant is also very involved with the subsidence problem. The Merrill bond effort is raising funds for signature gathering. This is the bond that puts $750 million aside to fix the canal. Larsen continued with Temperance Flat saying the MOU won’t be cheap but qualified entities can join together and raise the funds. He said the City of Fresno jumped right in and said it wants to be a big player in this project. Mills rhetorically asked what other option is there available to the San Joaquin Valley to get more storage. Tantau explained Temp Flat will provide another million-acre feet in storage. Who wants to spend how much is the question. Mills punctuated this by saying the cheap water is gone, but ask a Friant grower which costs more investing in a new dam or the cost of the two years of no supplies.

Larsen went over the Temp Flat MOU with the board. He said the term would be two years, a short leash. The purpose of the MOU is to properly fund the preconstruction portion of Temp Flat to determine some estimated value, costs and return on investments. This isn’t a JPA, it’s a MOU and won’t impact any existing rights or obligations. It is only addition storage and Friant’s CVP rights won’t be impacted. FWA will maintain its current rights on the SJR as if the Temp Flat wasn’t built. There can be no negative impact on the SJR settlement. The project must be used to help with recharge and increased supply/reliability. If there is less chance of spill at Temp Flat then the water should be stored there and not San Luis Reservoir. It costs $100,000 to buy into the MOU and Friant will have a set on the board. A steering committee made up of designated representatives from the signers will handle the minutia. Larsen said a lot of other things you can find in the draft MOU. I had the sense Attorney Aubrey Mauritson was completely happy with the wording but was identified some changes

she’d recommend. Mills and Tantau have been involved in the discussions of the draft MOU. Mills said he’s as comfortable as he’s going to get due to the ease of withdrawing from this agreement. Tantau said if Kaweah Delta joins with other districts and isn’t the lead it’s possible KDWCD won’t even have its name on it. He said one option is to stand back and see what happens before joining. Larsen also said there is a lot of modeling planned and this will have to be paid for equally. Aaron Fukuda, engineer for Tulare Irrigation District said his board wants to stay engaged. Both Fukuda and Larsen said various GSAs have been wanting to join up. Larsen said there are no formal requirements to form a JPA if groups want to join up. There could be financial obligations in the near term. Eventually the Kaweah Delta board approved going forward with the MOU.

KDWCD awarded Moore Twinning Engineering the monitoring wells project for the Paregien Basin recharge project. Moore Twinning isn’t a firm I hear much from in the water world. Hope they do a good job. The other basin projects listed on today’s agenda were: Oakes Basin, Hannah Ranch Basin and the Kaweah River Basin. Keller said there are some Caltrans permit hang ups but that looks doable.

Larsen said growers are no longer willing to fly under the radar and are now trying to shore up any water rights available considering SGMA. He said the Greater Kaweah has approved a set of bylaws and there is now official guidance. As a group the sub basin is applying for Prop One grant money. Tulare County will handle the assessments. This also a policy document, an agreement, between the three GSAs in the Kaweah River Sub Basin to exercise coordination needs. There’s a management team and three experts from each GSA that meet. These folks all serve as advisors but only the GSAs can vote. The MOU works this out. Larsen said the GKGSA is still looking for a consultant to develop its GSP.

The next meeting is November 7th at 9am. The meeting then went into closed session.

ALL RIGHTS RESERVED.  Copyright 2017 by Waterwrights.net  No part of this publication may be reproduced, stored in a retrieval system, or transmitted in any form or by any means, electronic, mechanical, photocopying, recording, or otherwise, without the prior written permission of Waterwrights.net .