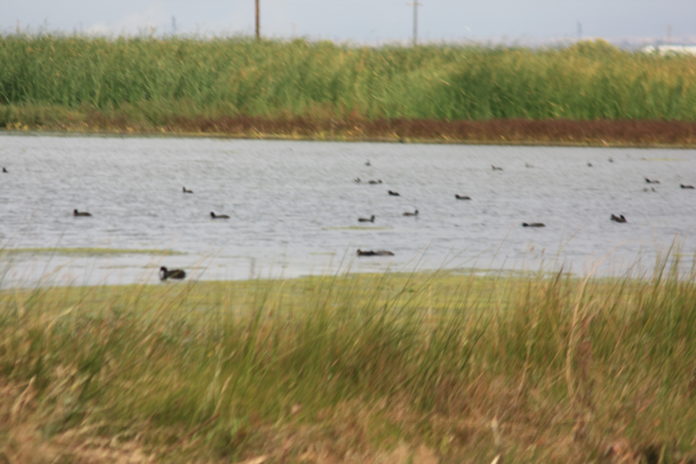 The Kern Water Bank Authority held its board of directors meeting on Tuesday, July 7, 2020 at its Bakersfield headquarters by remote meetings. The gas I save for this one meeting alone is an incentive to keep tele-meetings going after the coronavirus gives out. But, on the other hand I like going to this meeting and I have to admit I miss seeing these ladies and gentlemen. That’s for almost all of the meetings I’ve been able to attend over the years. Sometimes it’s boring like a soap opera but like a soap opera you want to know what happens next.

It was a Microsoft Teams Meeting and while waiting it played a particular type of “on hold music”; it’s a very lo-fi, smooth jazzy, endlessly repeating riff. Ear pudding without the sugar. So I was OK when things started. There were only two or three folks at the office

from what I could tell. But there was a quorum and KWB General Manager Jon Parker got everyone sorted out. But there were audio troubles. This caused the meeting to start at 3:06pm. That had to gall Chairman Bill Phillimore’s Britannic sensibilities. He always starts on time. But he might have been home in his pajama’s scratching where it itches and not all that stressed.* Who knows? It’s wasn’t a video conference on my end.

The minutes were approved and Danelle Lopez gave her treasurer’s report and it was also approved. I was talking to someone the other day about special district finances. Water can be viewed as a manufacturing input for food. Farmers, like any good businessman will keep a close eye on his expenses. I’ve heard them argue over $.27 difference in the cost of a bearing. You have to be a good bookkeeper and accountant to be able to cut it at a water based entity. In that mode the expenses were scrutinized and approved.

The KWB can sell habitat conservation credits to various customers. The price of a credit hasn’t been changed in years. Cal Trans likes to buy big credit purchases that allow them to take out listed species at some other location. In 2012 the price was $15,000 per credit and remains that as of today. KWB’s credit carries special flexibility you just can’t find anywhere else. Cal Trans wants $3million worth. That helps the bank’s well maintenance fund a good deal. There was some talk about raising the price as there is only 1,800 credits

left. The board decided today’s deal will be $18,000 but that’s it. From now on it’s going to cost you $20,000. I think Cal Trans got off easy. What if KWB showed the State of California’s Department of Transportation all the generosity and cooperation given to farmers in the San Joaquin Valley from High Speed Rail? In comparison Cal Trans got off cheap.

The next item was a Resolution to enter and act on authorizing a subgrant agreement for Round One IWMP implementation agreement with Buena Vista Water Storage District. The board approved.

Staff reports followed and Parker said there is about one million acre feet in storage.

Recharge is ongoing and levels are in good shape for now. Forty-nine structures have been replaced on the bank including canal and road crossings. There has been work on well replacement and rehabilitation. There have been some good success stories in rehab. Some wells need to be cleaned out or replaced. One has more than 100 of sediment in the bottom and a broken casing. It was drilled in 1950 and it needs to be replaced. There is already a drill rig nearby and available, so it was an easy decision.

Superintendent Nick Torres reported all the really old wells have been identified. He said there is work going on to improve the recharge basins. Parker said the (I think Kern Water Bank Canal) will be de-watered in August for some repairs. Cattle are grazing parts of the Bank and I’m embarrassed to admit I didn’t know tumbleweeds can be good feed when green. For the tumbleweeds the cows don’t get there is spraying. Parker said the numbers are pretty good this year.

There is a proposed pump station called the Strand Station. Construction company WM Lyles gone through the submittal review process and concert has been poured. Once the canal dries work will continue. There is also a lift pump known as C8 and staff is working with Farm Pump & Irrigation on this.

A lot of the outside committees have been cancelling and there was much to report. The roundabouts on Enos Lane and Stockdale Highway are complete so we won’t get to hear anymore jokes about them for the time being. My memory isn’t strong enough to recall

when the bike path to nowhere was first proposed but the notes in the board packet state construction is expected to begin later this summer. That poor path has gone through a torturous birthing process between all the agencies weighing in. Fish & Wildlife, Cal Trans, Kern County, the City of Bakersfield. I’m liable to air up the tires on what’s left of my bike and go ride it after the weather cools.

Well, there wasn’t any old business or new business so the meeting went into closed session and that was that.

and timeliness of information from Waterwrights entirely at their own risk. The opinions expressed in this report are those of the author and do not represent any advertisers or third parties. * I only bring that up because I had just awoke from a nap shortly before the meeting started.