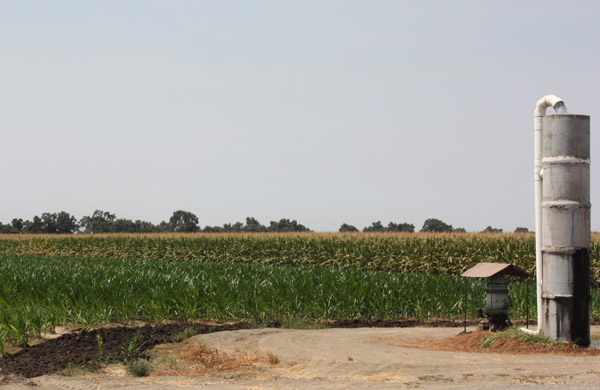 The North Kings Groundwater Sustainability Agency Board met on Thursday, January 25, 2018 at Fresno Irrigation District headquarters. Chairman Jerry Prieto called the meeting to order at 6:00 pm with a flag salute that included “under God” the way it’s supposed to. There were no changes to the agenda and it did take some head scratching to recall if the minutes were accurate since this body hasn’t met in a few months. But the minutes were approved, there were no conflicts of interest and then things got busy.

NKGSA Executive Officer Gary Serrato had FID engineer Adam Claes gave the water update. It’s not looking good. The Central and Southern Sierra snowpack is a third of its average for this time of year. The weather is tracking much like 2014; which was a drought year. There are also years past very similar to this year that had “Fabulous February” or a “Miracle March” so hope is still alive.

Ron Samuelian, Provost & Pritchard gave an update on the timeline and milestones on the GSP and coordination of the seven Kings River Sub Basin GSAs. Serrato said Kevin Dale, Attorney for the NKGSA is heading the coordination agreement with the other GSA’s attorneys. Dale said an agreement on a MOU between the GSAs is on schedule for a March signing. Samuelian said the development of a safe yield and sustainable levels is on the way and everyone will become very familiar with these matters.

FID Assistant GM Bill Stretch chairs the technical subcommittee and he reported most of the tech committee also attends the advisory committee meetings. Stretch said the tech committee has set a goal to have a complete draft of the GSP within a year from today. He said the committee meets monthly at this time and reviews a chapter at a time. He said the easy stuff has been completed and the more challenging matters are next; such as the overdraft numbers and boundary flows between the GSAs. Those figures have to be established and agreed upon before the GSP can be written.

Serrato introduced the lovely Lisa Koehn, chair of the administration and fiscal subcommittee. Koehn has retired from the City of Clovis and just came back from Hawaii to be here and she received a great deal of thanks from the board for doing so.

Dwight Miller chairs the membership, outreach and communication subcommittee. He said his committee’s purpose is to be sure every stakeholder group in the GSA will be informed and involved as much as possible. He contacts schools, Rotary Clubs and anyone else who will listen. Miller said there isn’t much to say until the GSP is developed. However, the outreach consultant Craig Moyle has written a 40-page plan the subcommittee is reviewing with some editorial suggestions. Miller said one of the immediate goals to increase the interested parties list. He talked about website analytics and noted someone from the Czech Republic spent four minutes on the site.

As a special district type organization new to the world finding Errors & Omission insurance was a challenge. Now ACWA offers E&O through its Joint Powers Insurance Authority to GSAs. Claes told the board since there is one director on the NKGSA board who isn’t representing a public agency NKGSA won’t be able to vote on ACWA matters. Oh well. The GSA board had to execute a JPA agreement and adopt a resolution consenting to enter the JPIA – to simplify matters. The board did so unanimously.

Dale gave the attorney’s report and he reminded the board they have to turn in their financial conflict statements. DeAnn Hailey, FID Controller gave the financial reports. Hailey did her usual dazzle and had the board eating out of her hand. She does a good job presenting the financial statement, expense report and revised FY 2017/2018 budget. The board agreed. Fresno State University is a part of this GSA but approval is waiting on the Chancellor’s desk. FSU’s $22,000 share of the budget will be collected retroactively whenever they get permission.

Serrato gave his Executive Officer report saying although P&P is doing a good job he may have to hire extra help. He wanted direction from the board as whether or not they want him to bring every hire to the board or will the board give him latitude to hire consultants on his own recognizance. Dale said this is not an action item and up to the board to give direction. Prieto said to consider this; there will be a scramble to hire the best experts and there may not be time for the board to meet. Prieto said he is in favor of allowing Serrato to use his judgement as long as there is consistency. Director Jose Flores concurred with Prieto. Director Chris Pacheco said he is ok with this as well as long as the expenditures are itemized and not just one glob of a line item.

Under director’s reports Prieto thanked everyone for their help and dedication. Director Tommy Esqueda said he’d like to review the outreach plan before it goes to widespread distribution. And that was that.