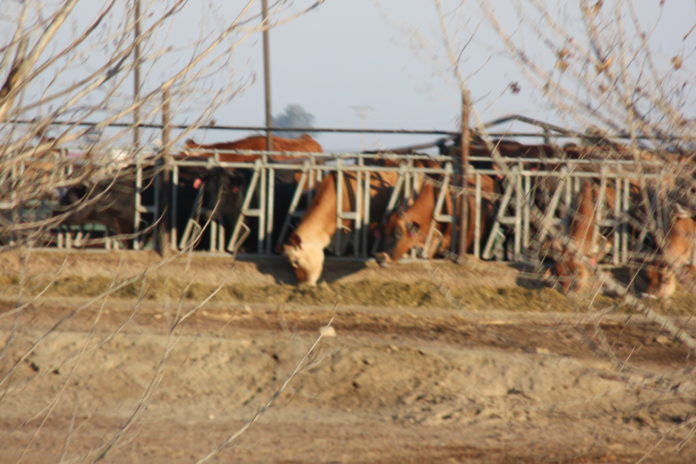 Water availability is a big deal to a dairy. Without an accessible and relatively clean water supply, dairy farming is not possible. Much of California enjoys a Mediterranean-style climate, where precipitation is not a year around expectation. And yet California is home to the largest dairy industry in the United States. Part of my responsibilities for Milk Producers Council is to be the dairy industry’s eyes, ears and advocate on water supply issues. As you might imagine, California has lots of water issues. So how are we doing?

For the Central Valley, groundwater regulation is in the process of being

implemented. While Southern California dairies import a vast majority of the feed consumed by cows, in Central California, there are extensive farming operations associated with the milking facilities. It is the growing of local crops for cows that requires significant amounts of irrigation water to sustain these family dairy farms. A measurable percentage of the Central Valley dairy industry is in areas where the irrigation water supplies come exclusively from groundwater.

The Sustainable Groundwater Management Act (SGMA) became law in 2014. It requires every part of California that has groundwater to bring that land under the jurisdiction of a new local agency called a Groundwater Sustainability Agency (GSA). These GSAs have the responsibility and legal authority to create and enforce a plan that will eliminate “undesirable results” from the overdrafting of groundwater. “Critically Overdrafted” basins were identified by the state (see map at right). These areas of California are required to eliminate “undesirable results” by 2040.

Essentially, taking more water out of the groundwater basin than is recharged over a period of time is considered overdraft and an undesirable result. All the Critically Overdrafted Basins have now submitted their plans to the California Department of Water Resources and are in the process of implementing them. From the northern half of Kern County into Tulare County, the GSAs have created groundwater budgets for their landowners and have created groundwater allocations and measuring systems, along with fees for usage, that dairy families and other farmers must comply with in those areas. A similar system is now close to implementation in parts of Madera County where we have

dairies. All these systems allow for landowners to use more groundwater now – during this transition period – than will be allowed after 2040. Northern Tulare County, Fresno County and Kings County GSAs have not yet implemented allocation programs but are putting in place the measuring and tracking systems that are  necessary prerequisites for an allocation system in the future. Parts of Madera and Merced County GSAs are also working on groundwater measuring programs, but actual allocation systems are probably farther off. When you get north of Merced, there is much more surface water available for groundwater recharge and the shortage of groundwater is not as acute.

precipitation years that occur two or three years out 10, where flood flows emerge in California’s water ways that, under current scenarios, are allowed to flow out to the ocean. Those are the flows that are available for capture that can be redirected to places where the water can be percolated down into the ground. Increasing the capture of flood water will require a significant investment in conveyance infrastructure, in combination with the development of significant recharge areas. Recharging those flood flows on farm ground shows great promise and can be accomplished at a modest cost if the conveyance structures can be created to disperse those flows out to the farmland.

The gap between irrigation demand and the sustainable supply of groundwater is estimated to be on the magnitude of 1.5 million acre-feet per year. While this shortage seems overwhelming, it is estimated that flows to the ocean in wet years – which are surplus to the environmental needs in the Delta and when averaged over all years – amount to about 10 million acre-feet per year. Clearly there is a supply of surplus surface water available in those wet years, but it needs to be captured and moved to the shortage areas at an affordable cost.

There are other constituencies in the Central Valley besides agriculture that are also facing a stressful future as a result of SGMA. There are many rural communities that have significant water supply and quality problems now and are facing significant impacts from job losses if nothing is done to address the impacts that will come from SGMA. There are also environmentally sensitive lands and potential riparian corridors that could benefit greatly if the surplus flows that now go out to the ocean were diverted to the Valley.

To identify these needs and opportunities, it will take an organized effort of all the various interests in the Central Valley. Milk Producers Council is involved with the Water Blueprint for the San Joaquin Valley, which is an effort to coordinate the entire Central Valley community to address the subsequent water, economic, environmental and sociological challenges exposed by SGMA. It is early, but potential surplus water supplies are being identified, along with initial evaluations of routes for conveyance facilities that would bring water to shortage areas in such a manner to assist rural communities and support environmentally valuable lands. The effort is complex, and solutions will potentially be very expensive. However, the cost of inaction is also expensive.

One of the first actions of the Blueprint was to commission an economic impact study. Dr. David Sunding, a respected economist from UC Berkley, evaluated the economic impact of using land fallowing as the primary SGMA compliance strategy. The study documented that SGMA implementation, accomplished solely by means of land fallowing, will result in $7.2 BILLION in lost farm income, a loss of 85,000

direct and indirect statewide jobs, as well as loss to local and state governments of $535 MILLION in annual tax revenue. Facing this type of a future should propel all of us to support measures that will lessen that impact. You can learn more about the Blueprint here.

Meanwhile, there are several threats to existing surface water delivery systems that are ongoing. The Friant Kern Canal delivers water from Millerton Lake above Fresno all the way down the east side of the San Joaquin Valley to Kern County. The capacity of the canal has been impacted by localized subsidence in the Porterville area, restricting the carrying capacity of the canal by about half. The engineering and planning for the fix is nearly completed and partial funding has been identified. More money will be needed to fully restore the canal to its design capacity.

Another threat to surface water supply is a proceeding of the State Water Resources Control Board to restrict irrigation water diversions from the Mokelumne, Stanislaus, Tuolumne and Merced rivers that are tributary to the San Joaquin River as it flows through the Delta out to the ocean. The myriad of communities impacted by this proceeding have attempted, through negotiations, to come to “Voluntary Agreements” that would meet the environmental goals desired by State Board in a less costly and more environmentally efficient way. While there have been some indications of progress, success in these negotiations continues to appear just out of reach.

The other big impact to surface water involves the Delta. It is through the Delta that the State Water Project and the federally owned Central Valley Project get the water to move to central and southern California. There are endangered fish populations in the Delta. These two large water supply projects are controlled by operating permits and protocols that are designed to limit damage to fish. The Federal agencies did produce and implement an updated plan and protocol that is designed to be better for fish as well as providing increased opportunity for water supply in very wet years. One of the things the new plan calls for is the development of a Delta Smelt hatchery to greatly enhance the population of that endangered species. Unfortunately, the whole decision, which was years in the making and developed by

scientific experts in the field, got caught up by the politics of the California vs. Trump feud that seems to influence everything the California government does today. It’s worth noting that this entire process started under the Obama administration, which then initiated a re-consultation process with the goal of modifying the rules based on the scientific findings.

The bottom line is that there are lots of challenges in California water. Having wet years helps to ease the pressure, but those above average water years are few and far between as well as unpredictable. We need to be prepared to make the most of them when they occur.

I moderated a panel discussion on SGMA at the Dairy Sustainability Summit (see below). It was an informative panel and runs just short of an hour, which you can view here.

This article first appeared in the Milk Producers Council and is used by permission. Thanks MPC. The author can be contacted at: geoff@milkproducers.org