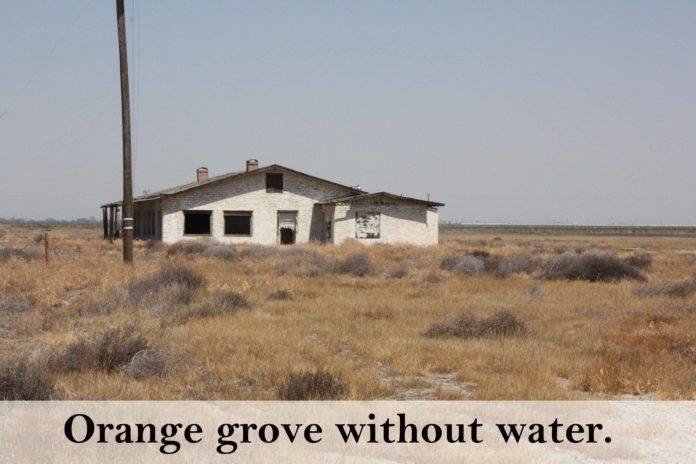 The Westlands Water District held its board of directors meeting on Tuesday, November 21, 2017 at its Fresno headquarters. WWD holds committee meetings before the regular board meeting so the minutia of the details is fresh in the directors’ minds. It also often leads to a faster meeting. Today, however, a closed session item was moved to the front of the meeting and I inwardly groaned. General Manager Tom Birmingham said it would only be five minutes. Birmingham is also an attorney and I confess I didn’t believe him. I was wrong and not too proud to admit it was actually less than five minutes.

Meanwhile back in open session grower Tom Coleman had nothing but praise to WWD staff in a dispute he’s had with the district over how purchased supplemental water. This was item 10 on today’s agenda. Coleman was representing Prem Farms LP and the board waived the provisions as it believed it was in the best interest of fairness and will consider addressing the provisions in light of this unique situation. One of my favorites, an audit review, was next presented to the board. I certainly didn’t hear anything amiss and neither did the board based on its approval of the report.

Birmingham began his GM report by congratulating Director Dan Errotabere being named as the Westside Man of the Year by the Boy Scouts. Staff then reported on water supply. He said demands are trending higher than originally forecast. It was announced the new faces of the US Bureau of Reclamation will be introduced at the upcoming ACWA. Birmingham said Jeff Recker is the new Central Valley Project manager for the Bureau. WWD’s Jose Gutierrez has been sitting in on meetings with the new Bureau folks to help get them up to speed. Birmingham pointed out the heavy lifting done by Johnny Amaral and other WWD staffers to get the westside drainage settlement on the table legislatively. There were some set backs in the Senate after fantastic, bipartisan support in the House. Congressmen David Valadao, Devin Nunes, Kevin McCarthy and Jim Costa were said to have been extremely helpful but the two California senators; Diane Feinstein and Kamala Harris were not so helpful. They balked at the lack of a senatorial hearing. Fine, have a hearing. This settlement is the one brokered under the former President B. H. Obama administration. Birmingham was effusive in his praise for Amaral and he said WWD has been asking the senate for a hearing for the past two-years. If the Bureau doesn’t get this fixed it will end up owing millions of dollars under court order. Director Sarah Woolf asked if the Bureau is working with the WIIN Act and it hasn’t but there is a good deal of poke at the Bureau going on.

Amaral reported the social media campaign to educate the public on farm water is underway but barely. He’ll have updates soon. But sure to note there is no Russian collusion in this effort. One of the best public information officer I’m aware of is Gayle Holman. She told the board WWD has secured a very good booth at the upcoming World Ag Expo in February. The board also thank Director Gary Esajian for his service. He’s retiring after three terms I think. Today is his last day on the board.

Items three through six: outside agency activities, legal affairs committee, O&M committee and the personnel committee all had no reports.

Errotabere heads the water policy committee and staff reported the water supply/exchange agreement with Poso Creek water interests. WWD water can bank and use this water if I understood correctly. It sounded like a good deal for WWD. About 25,000 a/f is transferable and most of it will come back to Westlands. Birmingham said the average year this couldn’t be something WWD BE involved in but since San Luis Reservoir is looking to fill and this creates the opportunity. If SLR doesn’t fill WWD gets the water back. The board approved allowing staff to negotiate the deal.

SGMA was next and Russ Freeman told the board the model is in its final phase of development and being calibrated to 85 percent accuracy. Work is going on to find tune that number towards more accuracy. Freeman described some of the variables being taken into account when getting the model tuned up. Interestingly as more and more drip line is installed the less recharge takes place and there are many, many miles of drip tape being used in Westlands and other places. The enviros scream for micro irrigation then swoon when recharge doesn’t take place. There is a $2.5 million grant from DWR for developing coordination and other needed SGMA required milestones. There will be a meeting at 1pm on the same day as next month’s Dan Luis Delta Mendota WA meeting.

An NGO representative named Monica said she works with community outreach for disadvantaged communities Leadership Council for Justice and Accountability. It has a Fresno office. When NGOs start adding the word justice to their names it raises red flags to me. Someone from WWD wrote them a letter of support as LCJA attempts to get some grant money to help with the GSA outreach. Birmingham told her WWD is very aware of the need to work with disadvantaged communities and welcomes her help.

Staff gave an update on Bureau projects saying the cost allocation study on CVP facilities hasn’t been updated since 1975. The purpose is to assign costs to the CVP goals and O&M costs and to have these costs allocated amongst the contractors. Director William Bourdeau asked the rhetorical question – where is the part about the enviros paying? Birmingham said the Bureau has not done so. It would be necessary to sue at this point to identify the benefit. Bourdeau said the enviro portion of costs continue to climb without corresponding benefits. The CVPIA is a legislative act that has cost the Valley a great deal of water. There is a provision for identifying the beneficiaries of the CVP as well as the costs. There is $92 million owed to power contractors. The Bureau is discussing shifting $150 million from power to water contractors. Flood control, navigation and recreation are some of the beneficiaries could be impacted and of course irrigation contractors will be hit as well. CVP O&M isn’t split evenly between all contractors. Some get 50 years to pay back interest on extraordinary operations and maintenance costs – XO&M. The CVP racks up about $5 million a year in XO&M. Birmingham did say the Bureau is willing to discuss these issues. However, if there was a catastrophic failure the feds will pay and bill the contractors. You may want to recheck this as I may have gotten some of the CVP cost allocations wrong. WWD has a water service contract and that alters the way the capital repayments are met; which impacts the interest costs.

Treasurer Bobbie Ormonde announced it was noticed by Fresno County if there is a decrease in voter turning a special district will have to hold elections in even years. Both Fresno County Council and WWD Attorney Phil Williams are reviewing this and bring it back in a month. The accounts payable and investments report were approved by the board.

The next the results of the recent board election were reviewed and Woolf asked if the recount that occurred could be used to improve the methods. Ormonde said there needs to be more outreach about how to ensure proxy votes are properly identified. A higher turnout would be nice also. Birmingham said WWD has gone above and beyond so there is really nothing more the district can do. Perhaps somehow changing the water code and the voter laws to make proxy voting more dumb proof could help. But an informed, willing electorate is needed in this democracy. A side note: the person who asked for the recount withdrew that request before the end of the recount could be completed. WWD COO Dan Pope said the League of Women Voters were observers and they left after lunch.

Three incumbents were reelected and the new director is Ryan Ferguson. Public comment was next and there was no one to speak. The meeting then went into closed session.