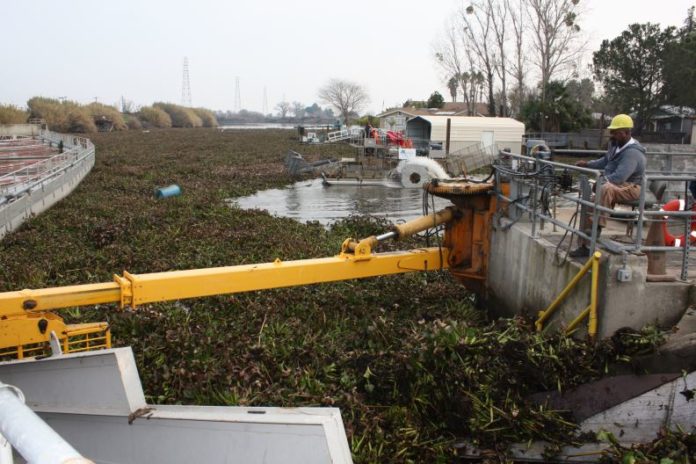 The Exchange Contractors board of directors met on Friday, September 4, 2020 remotely from its Los Banos headquarters. The meeting was on GoToMeeting.com, not one of my favorite remote meeting providers, it seems to be more of a hassle than a help to the technologically challenged, but then I’m not running the meeting or paying for the software.

The meeting got started at 9:00am with Chairman Jim O’Banion kicking things off with a flag salute. Treasurer Joann White gave the financial report and talked the board into paying the bills.

Water Master Adam Hoffman gave the water report saying Ex Con’s demands are down to 1,600 cfs. Shasta storage is at 2.8 million a/f, by the end of the month it’s expected to reduce another 600,000 a/f. San Luis is at 900,000 a/f combined and increasing. Millerton Lake is dropping. Hoffman reported pumping at the federal Jones Plant in the Delta was hampered by weeds at the fish screens.

Executive Director Chris White gave his report saying there has been an explosion of aquatic weeds at the Mendota Pool. Everyone’s got their hand in cleaning this up. There was no GSA meeting this morning. Ex Con has been working with Triangle T Water District on subsidence. The Triangle T ranch was rangeland. is was white area with wall to wall

White also said transfers include plans to move some fall water to Rosedale Rio Bravo Water Storage District in Kern County for some long term banking. Ex Con is also working on a deal with Valley Water in San Jose to move water around and prepare for dry years. Ex Con is looking to wheel some water for Triangle T. Orestimba Creek and Del Puerto Canyon will be reported on later in the meeting.

Jeff Bryant reported Palmer McCoy is the new Drainage Authority General Manager and is working well. Bryant said he’s glad to see him on board. The new JPA should be on its own before the end of the year.

Steve Chedester gave his Director of Policy & Programs report saying the fish screen control structure may be move to the north side of the San Joaquin River which sounded like a common sense move for integrating the needed infrastructure. This work is part of the San Joaquin River Restoration Program. It started out with a goal of returning 500 spawning salmon to the base of Friant Dam at $2.5 million per fish. That was more than a decade ago. It’s possible the price has gone up since then. Chedester continued saying Temperance Flat is on hold. The San Joaquin Valley Water Blueprint is moving forward with technical analysis on needed infrastructure.

White then spoke about moving water from San Luis Canal Company to Triangle T at $250 per a/f plus some wheeling fees. Columbia Canal Company’s canals could be used. Director Mike Stearns asked if this is an annual agreement or a long term deal. White said it’s yearly.

Consulting engineer Andy Neal reported on the Del Puerto Canyon Dam project saying the feasibility report is working its way through the US Bureau of Reclamation and the Bureau’s comments have been responded to asap, with 95 percent addressed. There are Bureau folks in Sacramento and Denver, Colorado working on some modeling questions with Dan Steiner and other modelers. It appears there are very good marks for technical feasibility, the financial feasibility will be reviewed. This project should wind its way to Washington DC in the next week or so. The EIR is set but waiting to be certified. Del Puerto WD as the lead agency will certify the EIR but Ex Con will have to sign on as well in October. The needed tech memos were delivered to the USBR today, I believe he said. He said things are going great. He said the financial assistance agreement is also ready for the Bureau. White and DPWD GM Anthea Hansen have been doing outreach. He said there is now a pro-reservoir Facebook page by a member of the public to counter act the negative reservoir Facebook page. The project is making progress and is on schedule.

Consulting attorney David Cory gave his Bay-Delta Water Quality/Regional Water Quality Control Board report saying his focus today will be more on surface water. Back in 2018 the SJV’s eastside wastewater monitoring program came under the spotlight of state regulators. This is of import to Ex Con because its wastewater monitoring program is similar. The findings of the expert panel will come out in a report for public comment and eventually end up at the Regional Board where it will most likely impose more costly requirements. Ag chemical monitoring and more public outreach requirements are expected to be bumped up. Cory said it could be worse and it isn’t clear at this time if the westside will have an expert panel look over its program. But the State Board gave the Regional Board permission to do so if the spirit moves them.

There is a 10-year study planned by the CV Salts Program to study salt management in the Central Valley. The CV Salts Program has been off following nitrates for the past several years and is now circling back to addressing salts. The State Board has reserved control over the Delta which will impact whatever else anyone comes up with in the rest of the Valley.

White gave the legislative report saying the end of the term in Sacramento was characterized by consultants as a dumpster fire. However, the 2020 legislative year ended without any major bill impacting water supplies or management. That was attributed to the overwhelming attention paid to the Big Marxist Virus.

On the federal side it looks like House Speaker Nancy Pelosi took time away from her hairdo imbroglio to work on a continuing resolution that will keep the feds running through the end of the year.

Chedester gave an update on the WIFIA loan program. He said the federal pumps can’t not at this time qualify for this program. Congressman John Garamendi is working on an amendment that will correct this and provide the option of a 50-year loan repayment. The board voted to support this piece of legislation.

Attorney Paul Minasian said there are things for closed session. He started with saying

the Friant suit has yielded a change in strategy. Originally the claim was the Bureau sent too much water to Ex Con in 2014 and damaged the Friant claimants. This has been modified by the Friant claimants. It wasn’t clear to me how the new strategy differed but Minasian is pretty sharp and I’m confident he understood the legal fine points. He also said the State Board is looking like it has hired a new Executive Director named Eileen Sobeck who always has a better idea; like the State Board doesn’t need to hold hearings or present evidence and can somehow it can order the Bureau to hold water in Shasta on the basis of cold water needs. This is a major operational threat that ended up with a lawsuit. On August 31st the State Board sent out a letter about this.

This attitude of the State of California righteously fighting the evil environmental degradation by the feds is feeding the increasing attempts to do away with due process. The State Board has also got its nose and nuts in the hydropower process ordering salmon to be trucked to and fro. This is dangerous to the idea of a free society that doesn’t have to bow and scrape to unelected bureaucrats. This could negatively impact the fundamental understanding of rights, literally. California Attorney General Xavier Becerra has filed hundreds of lawsuits against the federal government costing taxpayers who knows how much. How many of these lawsuits are frivolous remains to be determined. Does it hinge on one’s politics? Do we elect AGs in California to fight partisan political battles?

Under the Four Manager’s report White spoke for John Wiersma saying the demands at San Luis Canal Company have dropped since the end of the month. They have hired a new administrative assistant who is doing a great job.

Central California ID GM Jarred Martin said they’ve been working with the State Division of Boats and Waterways on aquatic weed control at the Mendota Pool but haven’t gotten very far. He’s now looking at private firms to do the job.

Bryant said demands for Firebaugh Canal Water District have dropped since August. He’s prepping for a three-mile canal linings. His office caught fire recently and it turns out there was some nasty something in the floor that must be removed carefully and that has slowed down the demolition and replacement.

White said there will be a Wednesday October 21st special meeting to deal with the Del Puerto EIR. The meeting then went into closed session and that was that.