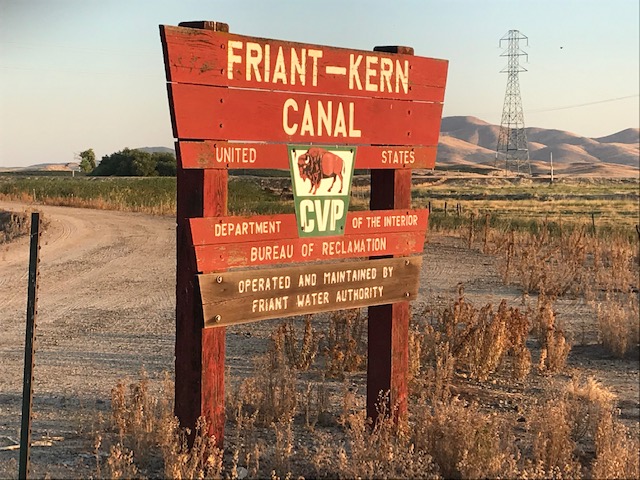 The Friant Water Authority started its Thursday, February 25, 2021 board of directors meeting at 10:12am on Webex from the Visalia Convention Center. The reception was spotty with both video and audio fading in and out. It was a bit difficult to follow some portions of the meeting. Webex isn’t my favorite. I’m a Zoom man, who’s with me? Chairman Cliff Loeffler began the open session by saying there is no closed session announcement. Next he asked Arvin Edison’s former General Manager Steve Collup to make a presentation. Collup is the current Water Warrior Award holder and as such it is his duty and pleasure to name the next award winner and pass the trophy on. He said the award has often gone to managers and there were even some US Bureau of Reclamation winners in the past. He said this time he will pick the recipient on the marathon and not the sprint. He passed the Water Warrior Award on to Friant’s own Toni Marie. Good for him and good for her. Congratulations.

Next CFO Don Willard presented the board with the financial reports and the board approved. Willard also explained the situation with cashflow due to both pump rewinding at the Jones CVP and payments to San Luis Delta Mendota Water Authority. This involved the amount of ultimate water allocation not yet known so it got a little complicated. Friant pays for part of the Exchange Contractors water expense under the original exchange agreement.

A man named Brian Thomas* and attorney Don Davis gave the board an update on financing the Friant Kern Canal Repairs. To restore the FKC to design standards of 2,750 cfs it will cost $263.6 million with $240.8 million spent on Phase I construction. So far $22.8 million has been spent on planning, permitting and administration costs. FWA has put in $2.6 million and the rest of the balance $20.2 million was paid by the Bureau. The Bureau has $250 million available for the project, minus the $20.2 million already spent. Other funding sources include the Eastern Tule Groundwater Sustainability Agency paying either a $125 million lump-sum or a quarterly payment totaling $200 million. Friant Division

contractors would have to put in another $50 million to keep the construction schedule on well, schedule. I think this is called the “Family Plan”. There is also the tiered zone funding. There are options to buy into a Zone Three plan where member districts can purchase above and beyond capacity shares and the money will be used to expand the conveyance beyond design capacity.

FWA’s CEO Jason Phillips discussed how to make the Family Plan work. All of this FKC repair activity will require an extra cash flow to reach the $50 million. On the package handout I counted 27 districts paying quarterly amounts based on their current share of allocations. There are a variety of ways for these districts to structure these payments. Phillips has invited all the district to share any concerns with him and staff. There are some districts that would like to pay their share up front instead of quarterly and that raises the question of whether a discount could be offered for incentive. There are a lot of moving parts to this plan. Districts could join together and finance their share separately with loans from other sources allowing them to pay their portion to FWA soon and pay back the loan on time.

Delano-Earlimart ID, Exeter ID, Ivanhoe ID, Shafter Wasco ID, San Joaquin Municipal Utility District and Stone Corral ID sent a join letter to FWA. These are Friant Contractors but not FWA members. In the letter they stated they “support direct contributions from the Contractors under the “Family Plan” of $50 million” and they are comfortable with a payment period from 2021 to 2023. They had two concerns. First, they want the payments based on O&M percentages but not collected as O&M Charges. They want them classified as capital contributions. Second they also had concerns as to how the Bureau defines “reimbursable” before they make any payments. Phillips responded that FWA will work with them in meeting these concerns. Like all of these funding issues things were more complicated but my takeaway is cooperation is increasing amongst all the players.

Water Resource Manager Ian Buck-Macleod was congratulated for a recent one-year anniversary of working at FWA. Good for him. He said the five percent initial allocation by the Bureau for South of Delta ag supplies was actually higher than he expected. He said the ASO flight will be today or tomorrow. That’ll be fun to see. He said the recent storms did help and the conditions at Shasta are improving. Not a lot but at least they are not going backwards. He said the 20 percent Friant Class I allocation should be higher in his opinion. He believes the San Joaquin River watershed may be able to yield more before this is over. The key here will be restoration flow allocations. The SJR is under a salmon restoration regulatory scheme.

Phillips said there are so many items impacting Friant. One is a reverse flow pump back project, others include water quality and he suggested we all take another three hours and go over them. He was kidding but he offered to schedule additional meetings or give the option of staying longer in the future. Something to think about for sure.

Buck-Macleod reported there is Lake Woollomes and a Deer Creek pump back plans on the drawing board. These plants would allow water in the FKC to move north. I suspect most of you know he FKC flows north to south by gravity. There are funding and timing issues that could use a further airing at a future time. Some director said if he will have to sit through further meetings he’s asking his home board for a raise or at least somewhere to take a knap.

FWA’s Government Affairs & Communications Director Alex Biering said state Senator Melissa Hurtado has resubmitted SB 559, a bill to provide some contribution to the repair costs of the FKC and other major canals in the state. She said there isn’t much on the water legislation in Sacramento yet. Jeevan Muhar, GM Arvin Edison asked if the state will help cover money spent so far. Biering said that is possible. Phillips said the way FWA is looking at SB 559 to cover the length of the canal. He’s hoping FKC can get $300 million that can spent on more that just the subsidence correction. I believe it was Director Jim Erickson from Madera ID who asked if that included the Madera Canal and since it is in pretty good shape the answer is yes.

Consultant Mike Villines reported California has been receiving more money than expected during the East Mid-Latitude Asian Virus. Villines said that money will be spent. He said the other big deal is opening the schools again with a rift between the legislature and the governor. Local school boards are placing pressure to reopen or find themselves on the losing side of the next election.

Villines said March 17th is the deadline for collecting signatures on recalling Governor Gavin Newsom. Once those are verified there will be a 90-day time to hold a recall election. He said the capital is closed but for one aid per office holder and the elected official. He said there is a filing fee and hundreds of candidates are expected to sign up.

canal funding bill from US Senator Diane Feinstein that will be part of an infrastructure bill. That won’t happen until the Virus bill is voted on tomorrow. He said don’t look for anything on the canal funding bill before April, if then. Amaral also said there have been many meetings with new administration appointees to be sure the Friant story and issues are being related accurately. He said building and maintaining relationships is still an ongoing priority. He said the recent dewatering of the FKC revealed a chance to take photos and put together a possible report on the canal from a very different perspective. He said he’s working with staff at the East Tule GSA about an agreement signing event coming up soon. He also said he’s looking for new communication opportunities with the twice monthly Friant Podcast with him as the host. They haven’t yet decided on a name for the podcast. Perhaps they could consider – What’s Wrong with You Folks?!!!, or maybe A Somewhat OK Talk About Stuff, or maybe THE JOHNNY SHOW.

Phillips gave the Blueprint report for Austin Ewell. He said San Joaquin Valley Water Blueprint Director Geoff Vanden Heuvel was listing in and he could confirm how much there is to talk about. He said Friant was instrumental in getting this going. The Blueprint

commissions a study by Dr. David Sunding that helped quantify what the loss of water would mean. He said engaging the Governor with subjects that don’t usually engage such as White Areas is very different than the usual engagement with Metropolitan WD and other large players. He said to help with this is a program at Stanford University that brings together many players; those with senior water rights and those with no water rights need a seat at the table. Although the Voluntary Agreements and the water quality control plan are getting all the attention the Blueprint is the best effort to make sure issues hitting the Valley are on the table.

Phillips said Wilson Orbis will transition into the CFO position and FWA will still work with Willard. He said new Bureau Acting Commissioner Camille Touton has reached out saying she appreciates working with Friant and no one expects to miss a beat. Phillips said he’s been pretty happy with the Visalia Convention Center as a location for meetings. There is a problem with meeting on the regularly scheduled March 25th date at Visalia, but the room is available on Friday the 26th. Right now the meeting is scheduled for April Fool’s Day on the first in Visalia. Herding cats is often easier than scheduling meetings. It appeared the board is OK with the 26th. Director Edwin Camp had something to say but his phone was cutting out so bad I couldn’t tell you what beyond the domino effect. Loeffler then shut the meeting down at 12:23pm and that was that.

*I must have been absent the day Mr. Thomas was introduced. I have no idea who he is or if he works for FWA or is a consultant. But I do know everyone defers to his expertise.